Hi everyone, pumping about 8500 gallons an hour from the sandbags in front of the deck, we have gas and will continue til the water drops or we do.  We have water all along the east side of the house, most of which is behind the bags, we added a water filled dike to our sand bags this am.

Gene says it is useless, but he keeps trying.  The chain saw artist (Gene) was at work on the deck, it now has holes galore, for the water dike and observation holes.

The water broke over the freeway this am, it should have relieved some pressure, but it is probably just running in here as fast as it is running out. ???  I hear on the radio that this water stretches from Kindred ND to way North of us.  Connie 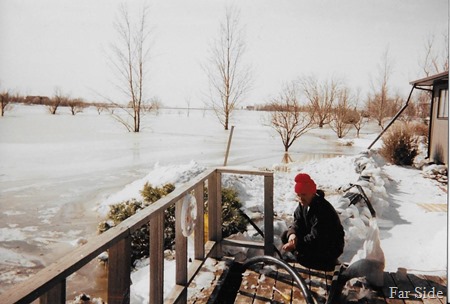 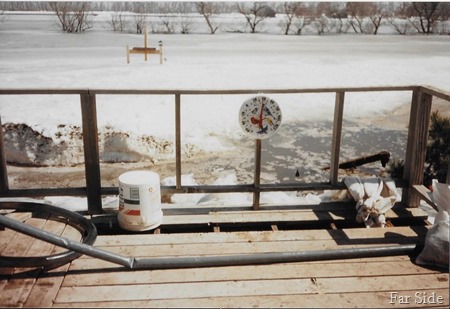 I kept thinking “It’s not so bad, I was watching the bird feeder in the yard…the water/ice was always at the same level”  Well…the bird feeder posts were froze into the ice and as the ice rose so did the feeder. 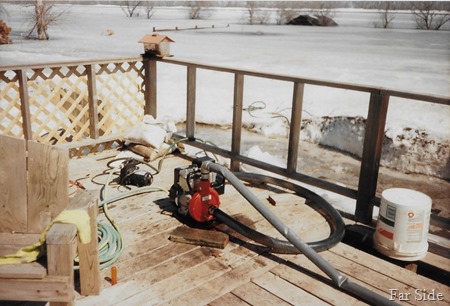 The gas pump out in front needed gas every hour.  The other pump was a small one and it was electric…you just had to make sure it didn’t get clogged.

The water seeped beyond the first line of sand bags and that is why we put in a plastic water filled dike under the deck.  This is on the east side of the house.

Here is what it looked like in the summer of 1996. 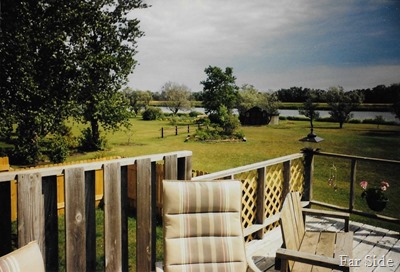 Lake Shure is in it’s banks and the garden shed has a very large garden right behind it before reaching the lake.  Seems far enough away. 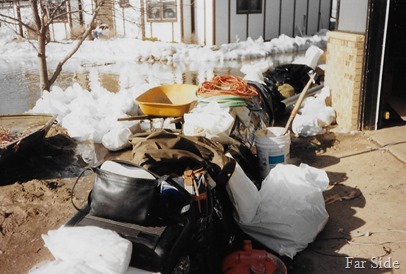 This is just outside our garage.  I think that is my Mom’s purse on the sandbags, looks like they brought us another gas can, note the duck boat off to the left.  I still have that trusty old wheelbarrow.  I am not certain when this photo was taken.  It shows the water between Stephen and Mae’s house and ours.

One of us was awake and on dike watch 24 hours a day.  We would make our rounds.  Out the patio door to check under the deck for water, then off around the south side of the house where we had two holes dug, in the holes we placed a five gallon bucket with holes in it and inside the buckets were sump pumps.   The sump pumps were on floats  and if the float didn’t activate we would do it by hand, then you walked along the west side of the house checking for water and into the garage door, where you would wipe off you yucky boots, go inside and head downstairs to the basement to check to see if water was coming in the window wells.  Then you would go back upstairs again, watch TV for a bit, warm up and make your rounds again.  The gas pump would spit and sputter at the end of an hour so you had to fill it with gas.   The person sleeping would be awakened by the absence of the motor noise.

Our basement sump pump ran almost non stop.  Gene used to time it…I don’t recall what it was ten seconds or so between pumpings…something like that.  I think we had a spare pump just in case.