I am still working on the Farm Diaries.  I wish I had more time to spend on them.
October 1924 was the focus the other day. I am getting a bit better at reading Grandpa’s shorthand.
9  Thursday Husked corn AM to PR in PM to get that we wanted on our trip
10  Friday Started to Iowa drove all day dinner at Sauk Center (100 miles) camped at Redwood Falls(93 miles)
11 Saturday Drove all day dinner near Spence Iowa (100 miles) to Logan (132 miles) about 7:30 Mother down to Vidas (sister)
12 Sunday  Home to Mothers both Wills there (Brothers in law Podendorf and Wettendorf))
13 Monday Mother came home about noon
14 Tuesday To Council Bluffs stayed all night at Grovers (brother)
15 Wednesday Rainy To George Rogers ( Tracie’s sister and husband) for dinner out to Aunt Annies for supper stayed all night at Geos Harold and family came in eve
16 Thursday  To Grovers after Mother then to Chester Graybills for dinner to Chester’s folks for supper there saw Vida Home to Mothers about 11 o’clock
17 Friday Up to Bill Podendorff ( Sister ) To Cal Woldermire  Cal came to Bill in eve
18 Saturday To Mothers for dinner stayed around Logan in PM To Chas Stuves (Tracie’s Uncle) overnight
19 Sunday Had picnic in Tourist Park  home with Frank Rogers (Tracie’s Sister)
20 Monday  Worked on car To Ervins in eve saw Father Uncle Franks there home to Mothers about 12 o’clock
21 Tuesday To Uncle Earls for dinner Uncle Chas in PM out to Will Wettendorf (sister) in eve
22 Wednesday Chas Norris to see us at Mothers in eve Uncle Earls Chas Stuve both Wills and Bernard there in eve played cards
23 Thursday To Mothers all day Cora (sister) came in
24 Friday Started for Battle Creek Ia to Lauras (Tracie’s sister) about 10 o’clock helped her move
25 Saturday Started for Minn dinner near Spirit Lake supper meal Redwood Falls camped at Spicer
26 Sunday Breakfast near Browerville to PR about one thirty dinner at Grandmas home in PM
I was surprised to see the entry on October 20…saw father. As far as I know Grandpa had not spoken to his father since he left Logan Iowa in 1914.  This is the first mention of his father in the diary.  (His father was not a very nice man, he was a drinker and wife beater.  His Mother divorced the rotten old coot in about 1914 or 1915.)
They must have purchased the car with a trip in mind.  They travelled Hwy 71 for most of the trip, with three children then ages 10, 5 and 3.  Motoring along at about 20 miles per hour if you were lucky. 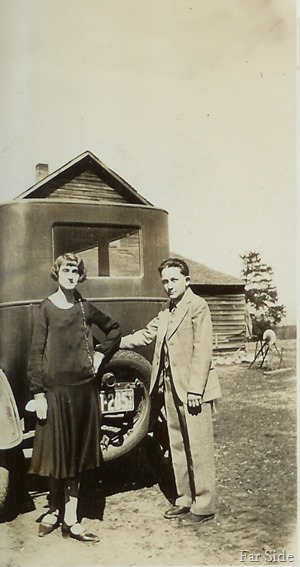 Aunt Skinnie (Frances) and Marvin (Far Guy’s Dad ) with a 1923 Ford.
In the Farm Diaries there is no mention of what kind of car they bought, it may have been this one that they took on a road trip back in 1924 all the way to Iowa to visit relatives.

Sounds like really slow going. I know from my grandfather, the roads of the time were bad and tires often needed changing.

The boxy look of the car left me wondering what it must have been like to travel for such long periods in it. I like Aunt Skinnie's dress. :-)

My parents in Illinois talked of trips to Iowa to visit relatives and that it was always a special journey as children back in the 20s. Aunt Skinnie could be in Downton Abbey with that dress. They look very proud.

Really enjoy reading the diary entries. Even nicer are the tidbits you add and the clarifications of who is who (whom??)

Wow! They were gone for weeks and visited & stayed with all kinds of relatives. What a trip! Would have been such an exciting adventure. :)

I remember reading that early roads were laid out so that no one's farm was interrupted, so many 90 degree turns in the roads. Traveling was exciting for the time even if slow.

Trips were a major effort in those days. Poor roads, no services and unreliable cars made for a challenge.

It's rather amazing what people accomplished when life was more simple but nothing was easy.

Road trips at that time must have been quite a production. Roads were probably rough and heaven only knows what kind of suspension the cars had. Grandpa must have been an adventurous sort.

Lots of wonderful writings from those days of his life though great to see the history stay alive with the journal ! Thanks for sharing love the old photo to . Have a good day !

My goodness they were sure busy on the trip, lots of visiting!

What a trip that must have been, especially with a three year old :)

Amazing the way people traveled in those days—staying with family members was the only way it could be done. They must have planned the route by letter-writing, probably. They would take a chance on finding their hosts at home at times. But then, most everyone stayed home, so not a huge risk!

I like how he wastes no words. Jumps from one thing to the other as he registers his day in order.

I love your diaries.....I think I lived a lifetime in that era....I would have loved it! But I would have been a cowgirl! LOL!

I enjoy these entries - Grandpa was sure very short and to the point (or didn't like to write much) :) That would be a long drive with three kids.