Hiya it is me Chance.  This is how it went down.  Far Side says we are leaving at 1PM to go to the Rabies Clinic. I don’t have rabies but I had to go anyways. 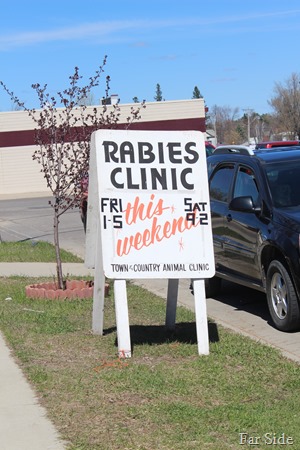 I didn’t need a Rabies shot but I needed a Lymes shot…you know so I don’t get Lymes from the ticks. As we were coming Odda and Putz were going…they were all done….we should have gotten there earlier.

We waited in line a long time…and hour and ten minutes.  Far Side said “They don’t have their shit stuff together.” They didn’t… there was a real line up at the desk where you pay.  Some dogs had never been there before.  When it was my turn Patty said “Hiya Chance” and got my record and agreed with Far Side that I just needed a Lymes shot.

Here was my view most of the time. 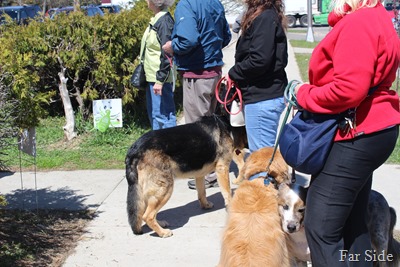 There was cowering, there was barking, there was peeing and there was even pooping. One dog  peed so much it ran down the sidewalk.  I was told to leave it..I did.  Several other dogs were so scared they pooped…and it was really stinky and their masters didn’t have doggie bags either…what were they thinking?

Anyways I am good for another year.  Far Side says “Cross something off the list!”

lots of creepy stuff out there

Glad you are all set for another year, Chance. You wouldn't have been peeing or pooping, I'm sure! :-)

Your perspective of what you see is WOW!
Have a fun day Chance--

Tucker here, oh dog! I am so glad I wasn't there. I get nervous. I wouldna been pee-in, but I woulda been pantin' and barkin' and pacin'. (When I typed that word the autocorrect changed it to "pain", Dreaming says that is exactly correct as I woulda been a big pain in the rear end, ya know!) But, I guess those nasty things keep us safe and healthy. Your momma and poppa are good dog owners!

Well, it's over thank goodness. It's easy for an old pro like you.

Good for you to leave off smelling the pee. What were those humans thinking to not have even one poop bag with them. Tsk! Tsk! You have the best masters. :)

I'm glad you are okay for another year, Chance!

Deer ticks are very rare here surprisingly so I've never heard of any dogs getting this shot. I'll consult Lily about it though....;)

Nope not a free clinic. But reduced prices.

Chance: I am so glad there are shots against Lymes because there are so many deer in your area that could be harboring ticks. It is so good of the Fars to get you there to have a shot. Too bad there aren't similar shots for people so everyone at your house could be protected. So good to hear from you!

My girls don't get lyme shots but they get Frontline Plus every month. I called the vet this morning to see if they were in but no....they work when they feel like it and you can't make appointments...you have to come and sit and wait. I drive 30 minutes so I call long distance to see if they're there first. Evidently today was not the day. I need Frontline and Nitty needs her allergy shot but I did get the machine that told me if it was an emergency there would be $95.00 minimum charge. Geez...is that all anyone thinks about nowadays? They started charging me a $40.00 office visit and I refused and said I would go elsewhere....they said they've always charged it and I must have just been "lucky". Really, how could I have been so lucky for 13 years? They backed off, thank goodness. Heck, Nitty's allergy shot is only $20 but to take her would have cost me $60.00? They are husband and wife and I think their oldest starts college this Fall so guess who's going to pay for it? The customers; the ones who don't speak up or speak out.

Sorry, I had just gotten off the phone and then read your post...evidently I was still hot under the collar. I apologize for ranting....this post is about you ...not me! Glad Chance got his Lyme shot. He is such a well behaved dog!

A office visit is 45$ here. At the special clinic they held there is no office charge. It is good to compare prices. :)

Oh Chance, so glad I sat down here for a minute and read your post. I needed this. I don't know who makes me laugh more, you or your mom. You really are such a good boy. I'll bet you just put all those other dogs in line to shame.

I'm sure both you and your mama are glad that's done for another year!

Oh no! Too bad you missed Odda and Putz. That would have made the waiting more fun. Glad you're protected.

Chance, it's a good idea to be vaccinated regularly to stay healthy. I hope you talked to those who were scared and to,d them there was no reason to be afraid.

That was a very long wait, and not pleasant. Sounds like you were a good dog!

(Pssst...Chance: don't let that list fool you. There is always something else added on when you cross one thing off. It's a rule.)

Oh no - those poor scared dogs!

Rabies is not an issue here, and last time I talked to my vet about it, he didn't recommend vaccination, thank goodness. Whether ticks are becoming a concern in this area remains to be seen. Last year was the first year I found any on the dogs. Doesn't look like it was a hot day of waiting in the sun at least.