So what do I know about Charlie?  He was born the fourth of fourteen children and the second son.  He had two older sisters and one older brother Frederick Ernest Albert better known as “Albert.”  Charlie was born  on November 1 1884.  His siblings were stairs steps at ages 3, 2 and 1.

Charlie grew up, he married ( In about 1904) Nettie D Copp who was born in Nebraska about 1883.  They had three children together Loucille ( or Lucille or Lucile) who lived in California, Curtis Feb 6 1909 to June 5 1971 who never married as far as I can tell and Mable who died before her Father Charlie died.

Charlie and Nettie farmed and nearing retirement they were custodians at the Harrison County Home until it was abandoned.

Charlie died on September 15 1947, a Saturday afternoon of a heart attack while mowing his lawn at his house on North Third Avenue in Logan Iowa. He was 62 years old. 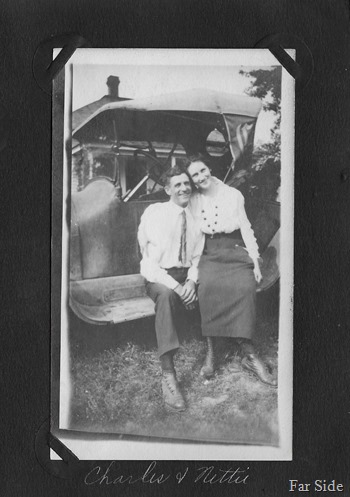 This is a photo from the photo album that Aunt Skinnie  (Frances) kept.  As far as I know this is the only photo that this part of the family has of Charlie and Nettie.

Grandma Tracie never talked about her brothers, I didn’t know she had brothers for a long time.  She had four brothers Albert died in 1958, Charlie in 1947, Ferd or “Ted” in 1941 and Fred in 1967.   So they were all gone and rather than speak ill of the dead she didn’t talk about them at all.

From stories handed down one was a horsethief and the others left their farms and their bank loans in the middle of the night in late 1929 or early 1930 and no one knew where they were for years.

They look like a happy, loving couple, and also very skinny! That must run in the family, along with good solid names. I wonder if, by the thirteenth or fourteenth, they ran out of names!

You reminded me in this post that we never see families so large any more. Fourteen children? Yikes! People died a lot younger in those days than they do today, although my dad died of a heart attack at 62 also.

Some mystery makes for a good story and a bigger desire to get to the bottom of the story.

Good for Grandma Tracie...she's a better woman than I! LOL! Interesting ancestors and good looking couple.

Such a nice photo! They looked like they were 'in love'. Thanks for sharing Charlie with us today

They do look very happy and in love. Sad that he died so young.

I'm sure, out of necessity, many farmers walked away from their farms in the late 20s and early 30s. Charlie and Nettie look happy in the photo.

I think many families have stories of scaliwags like that. I know ours does...:)

What interesting bits of information you dig up.The picture you have of them looks so sweet and innocent too.

What a sweet picture of that couple. Who knows what the other side of the story might have been for those four brothers. Too bad they felt they had to be estranged from the rest of the family. Hopefully, you will find out more about them.

It is always interesting to see how family structures worked in the past. They didn't work more that most of us are aware of. The photo is such a classic.

Families are so interesting!