As you know, my husband is the Class Babysitter Historian for his Class of 1968.

I don’t get too involved…especially when the popular wenches girls won’t let him scan their precious grade school photos.  He gets upset when he shares so much and a few of the cheerleader types won’t share a thing.  Then one finally came through while cleaning out a bunch of “stuff.” She had a photo of one of the Kindergarten class of 1955-1956.  There were three sections.  Far Guy has photos of two sections. He is missing the section that he was in….that is a bummer.  Maybe someday! 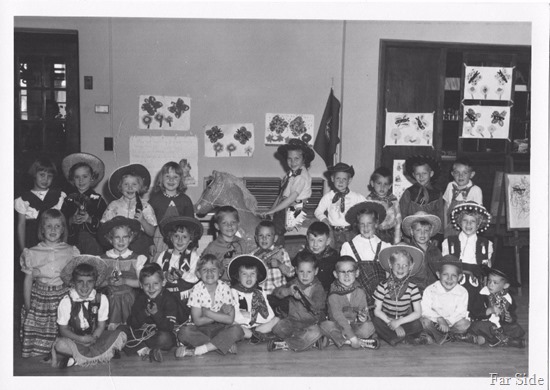 School was a lot different back then…you could bring your cap pistol to school. One of the little boys in the front row has a long rifle…probably a BB gun.

I am only the tech person.  I deciphered the Class Roll from Kindergarten Graduation, the children were not listed in alphabetical order???  So I made notes from the other photo we have and discovered that they are listed by class.   That makes the identification much easier.  I also said save the photo here and print it there…high tech “stuff.” 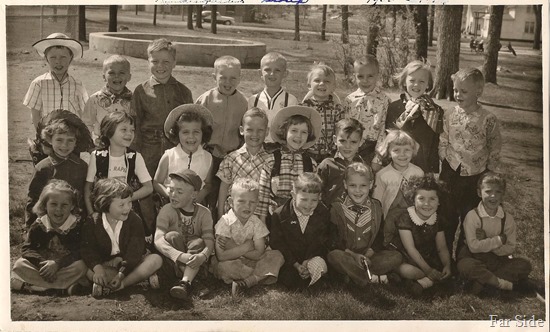 Since we know who was in the last photo that remains elusive, perhaps an email here or there will yield some results.  Never give up hope. Who knows I may find the photo in an antique shop someday.

These little kids all turn 66 this year.

Funny how those prissy, hateful "girls" have kept their same personalities! You guys enjoy the weekend.

I thought for sure she'd be teacher's pet on the horse in the back row! Lol
Why on earth won't she share the photo??? I hope someone comes through for you, Far Guy.

Gosh we were all so cute back then. And I love the outfits we wore to school , especially for class pictures. You were lucky to get those pictures. I was class of 52/53 in kindergarten. I think all my old class photos were tossed out when my dad moved out of his house. Have a great weekend and thanks for the trip down memory lane.

I agree with Mildred - - - some things never change from high school - - - even fifty years later. It made me thankful not to live in the town where I grew up because my identity is not what they tried to make it. I am a child of God and have to please HIM first and not the cliques. Life is happier and richer when you know that!

I love those old pictures, and it's sure fun to see how much things change in such a short time. And how, as you say, some things stay the same! :-)

Oh yeah, personalities tend to stay with people throughout their lives.

What cute photos! Love the cowboy kid styles in the first one.

Time sure does fly!

Cute pictures, when I was in high school boys often drove pickups to school with rifles in the back window and no one thought anything of it.

I sure remember when the cowboy and cowgirl suits...and toy guns. I was known as Dale Evans in the neighborhood.

I graduated in 1969 so this style of picture is familiar to me. I loved that the boy brought his gun to school. I long for those long ago days when we didn't worry that someone would shoot us!!

Isn't it funny how people are who they are in high school as adults....they just never change.

Funny how class photos disappear. I think I might have some that nobody else has.

Yup those were the days when kids were just kids ,Thanks for sharing , have a good weekend !

I have just one single class picture of my school days and it is grade one. I sure treasure that photo.

If anyone would end up finding that photo in an antique shop, it would be you!
;)

Hey, I was a cheerleader and captain of them but I went to a small school so the odds were much better! LOL! Plus, that is the stupidest thing I've ever heard! Why? Is she going to have it buried with her? It's not very "Christian" and she probably professes to be. I never thought I was ever better than anyone else...although I must admit I find it hard to be around people who pride themselves on being stupid. My theory is "God gave you a brain...try using it once in awhile!" I have a hard time with women who try and act "dumb" or like babies....ick! LOL!

Yes we could be kids....guns, bows and arrows, skinned knees and a devil may care attitude toward fashion. Our school photo was according to height...short in front....tall in back! Old photos are a wonder....the new digital may be 'better' but is it the same? will the photos stand the test of time.

Definitely a cowboy theme going on in that first picture! You are a woman who doesn't mince her words!