Yesterday we drove north to attend a funeral. Our Son In Law Andy’s Grandfather died. We wanted to be there to show our respect to Art’s family especially our son in law, daughter and our grandsons.

Art was 91 years old the father of eight and a WWII Veteran who served from 1943 to 1946 in the Marshall Islands as a Hospital Corpsman.

One of Art’s sons relayed this story about their family. “ Me being one of the youngest ( He said a mistake, a playmate, another mistake and another playmate) we were in the grocery store with our Mom, Fern, one day when a lady stopped to admire “The grandchildren”  Fern replied oh no these are my children.  The lady said I didn’t know you were Catholic?  Fern replied we’re not we are amorous.”

We had a funeral lunch: a hotdish complete with sliced olives, pasta salads, a wonderful pistachio salad (that had pineapple in it but it was so delicious), fresh buns, pickles of every kind and raw vegetables and dip.  Every kind of sugar loaded chocolate top bar known to mankind, coffee and lemonade.  The lunch was before visitation and the funeral.

The weather was sunny but the wind was cold. 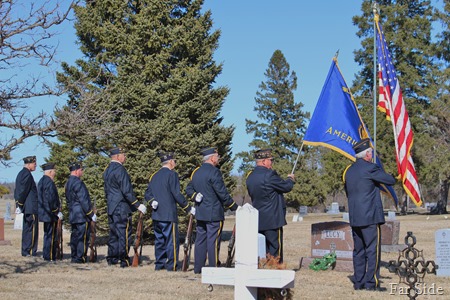 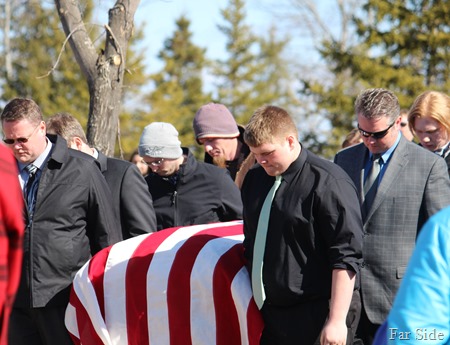 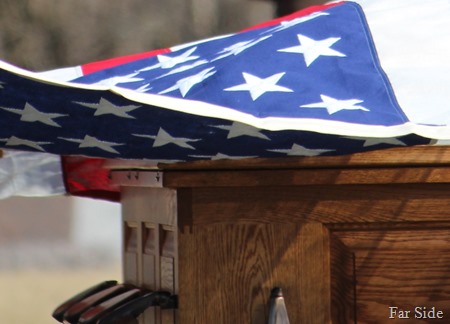 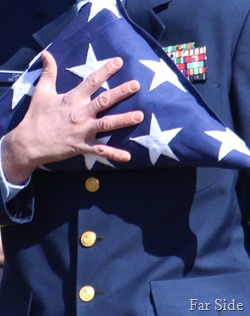 The flag is clutched by Aaron (Art’s Grandson and Andy’s brother), Aaron presented it to one of Art’s daughters. 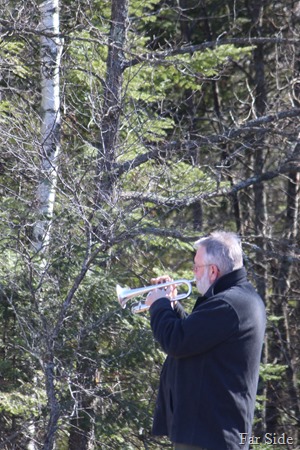 The bugler plays Taps for his Father.
I didn’t know if Bob (Art’s oldest son and Andy’s Dad) would play for his Dad or not…I think it was hard for him but something he wanted to do.

Bob is a Lutheran Minister, he had a small part in the service but basically left the service to his brother and the Pastor.

Bob was part of the five piece band that played during the service; a pianist, two trumpet players, a trombone player and a tuba player.  I admire people that can just pick up an instrument and play…we asked Andy what he played?  He replied “I used to play trumpet when I was in High School.”

That was a cute story Art's son told. I've never heard a brass band at a funeral but what a great send off. Your description of the lunch made me miss Minnesota.

My condolences to Art's family. What a cute story Art's son told. Glad Art got such a wonderful "send off" and you had nice weather.

My condolences to the family. Years ago I was asked if we were Catholics, after mentioning that I was the eldest of seven. I replied, " no, prolific Lutherans!" But then it wasn't only Catholics that had large families, many of my classmates were from big families. I hope you both stay well and that it hurries up and stays warm in our part of the country.

Playing taps can be difficult when it's cold and the wind is blowing. A thousand times harder when it's for your own father.

That's a funny story all right, and obviously amorous. :-)

What a wonderful funeral with family members doing one last service for their own.

Unusual to have the lunch before the funeral instead of afterward!

There are many excellent eulogies at memorials. Yes, amorous. Your memorials are very different compared to ours. I always enjoy reading the descriptions you write.

I love Fern's reply, some people just don't know how insulting they can be.

Heart warming and sad. Hugs! As for Fern! You go girl! Right up there with Maxine! :)

I love your description of the day's events. I'd never heard of having a lunch before the service, but why not?

The funeral was at 2PM and some people had to drive a long way. :)

I think having the lunch before the funeral is a great idea! Nice send off!

Sounds like a nice memorial service. I imagine playing Taps was really hard.

Military funerals are sad. They are very special, but sad. I would have cried when Bob played Taps for his Dad.

I got a lump in my throat the moment I read that bugler played taps fpr his dad. That's a very tough gig, but I admire him for it. When my dad died, his three granddaughters played a piece together on their flutes. They had to take turns between crying and blowing air into the flute. It all worked and sounded seemless, but it was sad to know how tough it was for them. RIP Art!

Taps can sure get to you and it sure can make you tear up.
The war II's will all be go soon.

A lovely send off . I am sorry for the families loss . Cute story in this and nice photos . Thanks for sharing ,

My deepest sympathy. I am touched by the outpouring by family and friends. I played piano when I was younger, and it was especially hard to concentrate when you were emotional.

I enjoyed reading your description of this funeral - from hot dishes to flag drapes to Taps played by a son, all very touching.

I didn't catch this earlier but I wanted to comment. It was such a great funeral as so many came to give their respect to the Grandfather. The grandson's with the casket is touching. I am glad there is a lot of that is still going strong from this WW 2 veteran.