It snowed again, about an inch plus.  When Chance and I went to the Post Office is was a wintertime ground blizzard.  Our local Post Office is only open from 7-11 AM after that you have to drive all the way to a bigger town.  The wind howled…it spit snow most of the morning. 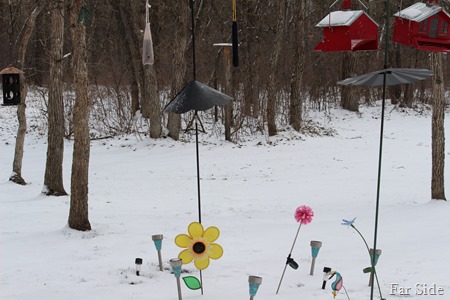 Then the sun came out and nearly blinded us.

We went for a ride after supper. 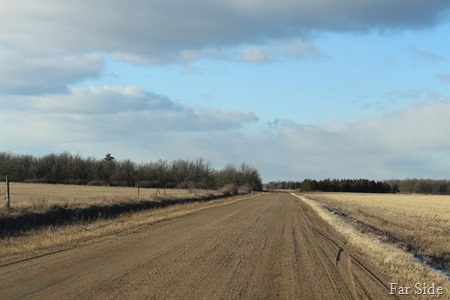 There was still some snow in the ditches.  We saw 17 Deer.  That is up from our 9 that we saw the other night.  No photo of them I was too busy counting or they were too far away.

My project for the afternoon was going through the medicine cupboard.  Everything out of date is getting tossed or taken in to the Sheriff’s Office.   I asked my husband why he had so much Stool Softener?  He claims that the last time he had diarrhea I bought him Stool Softener instead of the tablets that plug you up.  He said he thought it was weird at the time. ( Could it be that subconsciously I thought he should poop himself to death?  What kind of idiot would want a liquidy watery stool more soft?)

Cold tablets that are more than ten years old were tossed too…along with some Calamine Lotion that must be twenty years old. At least I now have some idea what we have on hand…and all pooping problems are well covered.

You have me laughing!
John is terrible about hoarding very old medicine. Occasionally, I sneak and clean out his medicine cabinet.
I hope your weather warms up soon. I love your header photos.

Thanks for the morning chuckle!

I'm in the middle of giving all cupboards in the house a good cleaning. There's something about spring that inspires us to tip everything out and start all over! If it wasn't for spring, I think we'd all suffocate in our junk!

You are so funny! Don't we do the craziest things? I'm ready this winter that keeps coming back to go away and stay away.

Lol...ten years old...you must not have had too many colds in your house. I need to do this too...I found a jar of prescription cream for something which I can even remember....from 1993.

Oh my gosh - I had to laugh and I was drinking tea! You remind me that I should probably go through my medicine chest, too. Your white yard looks a little like my white yard.

You are funny! About the only things that we would have that are really current are things like acetaminophen and ibuprofen. Oh and maybe some antibiotic cream. A few outdated things to get rid of for sure.
Sure hope Spring shows up and stays any day now!

I need to go through our medicine cabinet...its a tedious job, but so necessary.

I need to do that same clearing-out. A couple of weeks ago I went to take something I used to use often when my fibromyalgia flared up. It was marked expires 1999. Then I pulled out some Allegra: expired 2008. And these are the things I remember buying; there are older things, maybe from before we were married (30 years ago).

You seem to have a monopoly on snow and crappy weather. We go through the medicine cabinet from time to time. It should be done more often.

I have to remember not to take a sip of anything while reading your blog. I might snort laughter and choke on whatever I sip. What a way to go! Couldn't you just keep chcolate in the medicine cupboard? We had a LOT of snow falling yesterday, but there is. Nothing to show for it on the ground. Works for me! My spring cleaning chore tor this morning was to empty the freezer, give it a good wiping, and then put everything back and check the dates on the frozen stuff as I went.

Cleaning the medicine cabinet is something that should be done every 20 years or so. I must get around to it myself. Thanks for the funny reminder.

I keep running into meds that my father in law took. He has been gone 7 years and I immediately tossing them. I wonder how they got stuck into the back of the shelf.

By the time I finished reading today's post I was laughing but then I spied the first words of the last post ( Everything is brown...) and I'm now the tears are running down my cheeks. It's always good to have a good laugh.

You are hilarious. Cynthia sent me to see you as you may know how to sleuth old post cards

Now I'll have to go check our medicine cupboard and see if we have any stool softener left. :-)

Oh that's funny about the stool softener. Glad he didn't take it! :-)

I need to do that too...clean out the medicine cabinet. Snow again? Crazy weather here too. I think the frosts are over but we have a 30-35 degree span from morning til night and all I do is put clothes on and then peel them off and then back on again. This time of year you can actually have the heat and the ac on in the same day! LOL! P.S. I've already had 4 ticks on me! AHHHHH!!!! The dogs get Frontline Plus but me....nothing for the humans.