When you are doing family research sometimes you run across info that has been repeated for generations.  How much do you believe and how much is the stuff of legends?

Far Guy’s Paternal Grandmother Theresa or “Tracie” had four brothers.  They all came North from Logan Iowa in 1914.  Fitting bits and pieces of information together in later years Grandpa Stuve sold part of a very successful farm and helped his sons with farms of their own.  Then there was the Depression in 1929.  One night the boys all took off.  No one knew where they were for years.  The farms went back to the banks. Grandpa Stuve was left penniless.

One of them is known as a “Horsethief” perhaps he stole horses for the getaway. 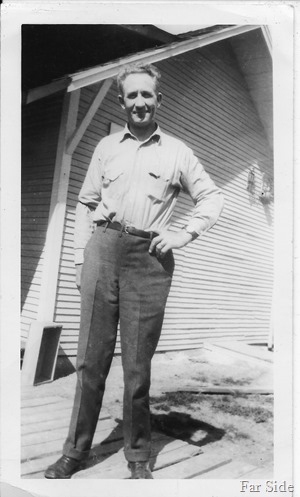 Here is picture of him.  He remains elusive for me.  I found him linked on Find A Grave to his parents.  Family history has it that he died in Montana and was buried in Kelso Washington.  Then why did I find him buried in Detroit Michigan?  He was married at least once to Effie Edwards but has no children. If he is really buried in Michigan he had another wife who had three previous husbands.

Was he really a horsethief?  He looks like a kind man, but you never know during the depression men were pushed to their limits.

This is the only known photo I have thanks to Aunt Frances and CousinTerry.

For now, I have my notes.  My OCD wants to fill in all the blanks…make sure it is really him in that cemetery in Michigan…something tells me that it is not him…but I may never know for sure.

I agree -- it's tricky knowing what to believe about the ancestral stories. The "horse thief" might have nabbed a horse for a joy ride when he was a 16 year old boy, turned it loose miles away from its pasture, and earned the name for all time. On the other hand, not very nice that Grandpa Stuve's boys accepted the gift of a farm and then left the old man in the lurch.

He does look like a kind man. I also wonder about that nickname, where he got it. They used to hang horsethieves, didn't they? :-)

There are many leads that take you down wrong paths sometimes. People who leave without notice and leave very little are hard to track.

Oh yes but some of the stories are great really be they true or not lol Great post and photo . Thanks for sharing , Have a good day !

It's too bad that folks don't leave diaries for us that follow to see what really happened! BTW, here is the link for the crusty bread in the cast iron pot: https://www.youtube.com/watch?v=I0t8ZAhb8lQ

A teacher friend was just telling that she had a first cousin that has been gone over 30 years. The internet helped to find him with everyone just now looking for him. He took off to Alaska, married, and rearranged the letters in his last name. I think he is not going to communicate with all the families that know him but they do know where he is.

Interesting, you should check out 23andme, they can enlighten you on connections you never knew about with genetic testing. A friend of mine was skeptical but did it and found unknown living family members.

Sounds like a very curious character, and I would want to solve the mystery as well.

Do you just love finding out all this family history? I sure do.

Another fun family story. It's so interesting and tragic to learn how many different ways the Great Depression affected families. And the burial mystery . . . good luck with that!

It does seem odd that he is supposed to be buried in White Chapel cemetery. I looked it up on find a grave and there's a note saying he doesn't have a grave marker according to the cemetery. So how do they know he's buried there? I live about 2 miles from White Chapel. If you ever get proof of his grave, I can go photograph it for you.

Ancestry says he died in Michigan.

I do like a good mystery but do not like not being able to verify the old tales of who did what.

Wonderful and thank you!

Thanks! I sent an note to the Tree Holder, I think he may be a cousin:)

It sounds like you are getting a few more leads in the comments here. Maybe more will be revealed,
I was struck by the four sons just leaving poor old dad when he had done so much to help them get a start. Sad.

I wonder if you could call the cemetery and confirm someone was actually buried there. It could have been a plot bought in his name. Or, in some cases, one plot could have a memorial plaque posted but not be the actual burial place. The cemeteries should be able to help sort that out...IF they are current cemeteries with offices, where someone could be asked such questions.

I found our family mystery resolved by digging through the archives of newspapers. Not easy but sometimes....

I want to know more too!

Isn't that awful though that all his sons left and never came back? Was he a mean father? It makes you wonder since he gave them all farms and set them up....so sad that they left and he was left penniless. I guess we'll never know.

Enjoyed reading this post. I'm new here as I came over from Henny Penny's bloglist. It's fun to find out whether the old family stories are real or just a story, and this one was very interesting.