The Grade School that I went to as a child was built and completed for the start of the 1957 school year when I was ready for First Grade…I was five when school started and turned six later that month….back then I think you had to be six years old by December 31st to go to school.

My parents had purchased a farm that was near a country school (Linnell School)…you could see it from our home. I would just have a short walk to school!

The building of the new school in Osage split the community…sometimes this split is still evident.  Some were in favor of a new school building and others thought the country school was good enough…and neither side spoke to the other side unless it was necessary.

Mrs. Pearl Sexton taught first grade, Mrs. Minnie Zauche taught second grade, Mrs. Lucille Stearns taught third grade, Mr. Oscar Vaadland taught fourth grade and was the principal.  He had a yard stick with a red bow on it and if you were misbehaving you got whacked with the stick.  The school nurse came out about once a week, not sure what she did other than keep track of who had their shots.  Each classroom had their own single bathroom and there were two other proper boys and girls bathrooms in the hallway.  Not sure why the classrooms were positioned as they were: 1st, 4th, 3rd and 2nd. There was a library room, an office, a milk room off the cafeteria ( it continually smelled like sour milk) a kitchen where Arvilla Nilson was the best school cook ever, and the cafeteria/gym.  Carl Nilson was the boiler operator, janitor and bus driver.

Everyone went outside after lunch.  In the winter we played king of the hill on the mountains of snow and in the spring and fall we would take turns swinging…there were maybe six swings and some monkey bars.

The last day of school we always had a whole school picnic with our parents invited and all kinds of fun games…sack and relay races.

I rode the bus to school, the bus driver was Ivan Siegford (he owned the hardware store in Ponsford and began his route with the Ritt’s girls over on Shell Lake.)  I got on the bus about 7:45 in the morning and got off at 3:45 in the afternoon.  For me it was not a long ride to school…about 7 miles. There were only a few stops after I got on. I loved a window seat on the bus so I could look out on the passing landscape and in the winter those frosty bus windows became a canvas for thumb print designs…and whatever else I could scratch into the frost. 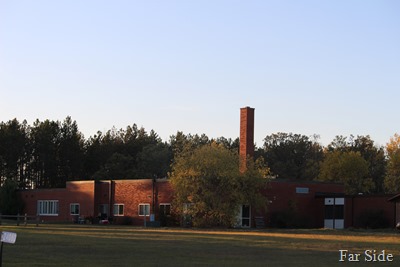 I took this photo the other day…it is now apartments and is owned by one of my cousins.

I learned to read ( See Dick, see Jane!), spell, write in cursive, how to add, subtract, multiply and divide.  Division was the worst for me in third grade…until one day “it clicked.”  I can still smell the thick white paste in the big jars and I remember how everyone smelled the purple mimeographed paper before beginning our work.