I had some visitors!  Kids my favorite kind of people in the whole world! 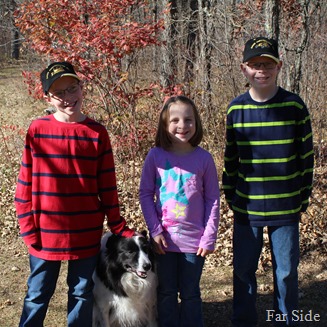 Jordan, Aubrey and Gavin with ME!

Jordan and Gavin are twins and they used to lived next door.  I tried to steal Jordan once when he was about three years old, I encouraged him to follow me home…and he did BUT I didn’t get to keep him for long.  Jordan tapped on the window and that got Far Guys attention and he made me take Jordan back home…in fact he followed both of us back to the scene of the crime.

The twins and their sister live far aways now and have two dogs of their own. 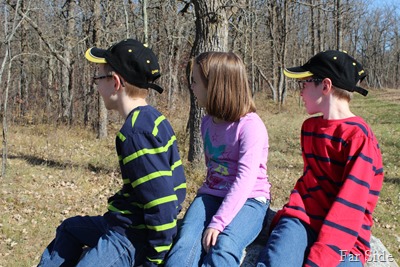 Far Side had a photo shoot with them and I got to supervise…in this photo I am off in the woods and have every ones attention!

After the photos they got out my tennis ball launcher and took turns launching balls just for me.

One of the twins asked “How old is Chance?”  Far Side replied “Almost eleven.”  The twins said at the same time  “Same as us!”