I bought some candy and bagged it up for the little ones that I hope will show up on Saturday night.  Bagged it up so I couldn’t eat it.  Then I bought some more of Far Guys favorite…so he can share if need be. 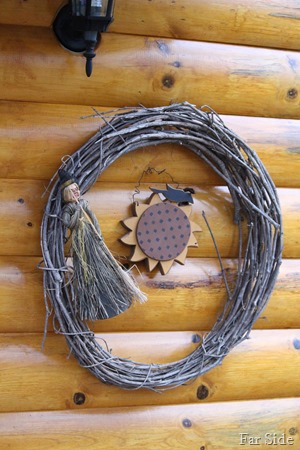 The witch is up…I like Halloween almost as much as May Day!  Fun days all about kids!  Our weather is supposed to be in the high 50’s for Saturday Night!! 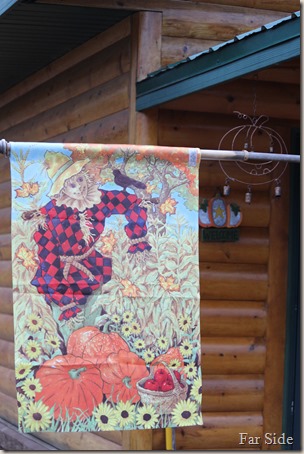 The scarecrow flag is up…I did get a few things crossed off my list yesterday.

We had a very interesting night before last.  I kept hearing strange noises like someone was outside horsing around.  I thought about waking Far Guy up but finally figured out what it was and went to sleep.  Far Guy was awakened by the strange sounds and thought we had a intruder…and he thought about getting the gun….then he realized what it was. 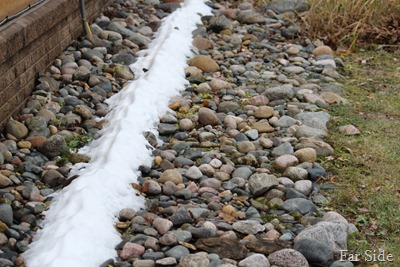 It was a sound we had not heard in a while…Chance heard it too and headed for the bathroom “his safe spot.”

When the snow slides off the steel roof it makes a rumbling noise and a swoosh when it hits the ground and we got enough snow to make noise on Wednesday night.  The photo is what is left over from the snow on the roof.  We have rocks on the east and west sides of the house…the snow makes a mess of anything planted…and gutters well you may just as well forget them…when the snow slides it slides.  One less thing we have to worry about during heavy snow years when people have to shovel snow off their roofs.

The snow is gone except for a few areas