The weather has been mild so we took time out to go to a High School Hockey Game.  A Girls Hockey game.  Our youngest Granddaughter Paige was playing.  She plays Varsity Hockey. 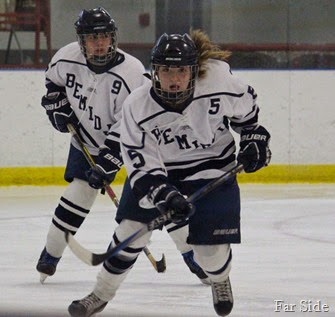 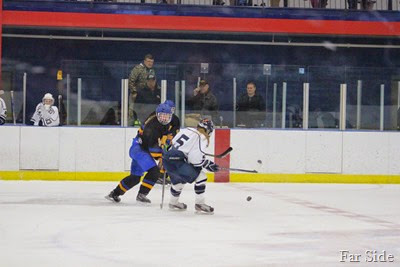 Paige has great Hockey skills.  She has played hockey since she was about six years old. 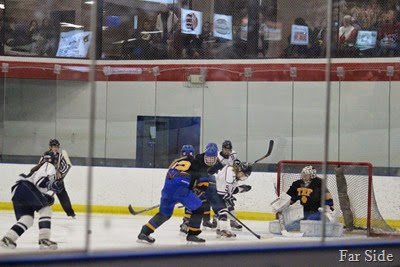 Here she is in front of the goal…too bad she didn’t have the puck!  The ice was fast…yes depending on the temperature of the ice…it is either slow ice think Figure Skating or fast ice for Hockey…and this was real fast ice. 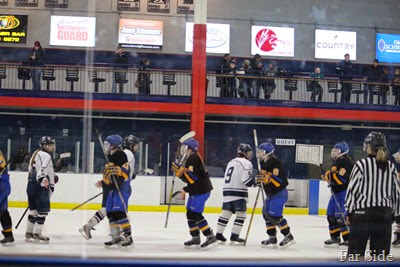 It was a good game even though they lost 0 to 5.  Thief River Falls has a great team. 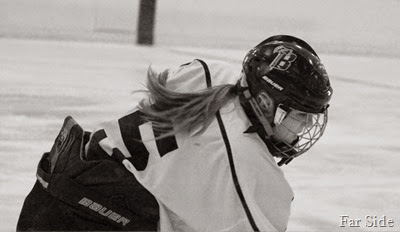 This is one of my best photos from the game, it could be an ad for Bauer!

Good job Miss Paige!  We stayed to congratulate her on skating a good game and then we headed home.

From the formal dance to the hockey rink, quite a change. Talented and beautiful! Nice photos.

Great photos of Paige. I know she was thrilled to have you there.

Hockey looks like the hardest sport to play! Paige looks professional. Love the pictures. Oh, those caramel rolls in your last post, look absolutely delicious! Wish I had one to go with my coffee this morning! Must be nice to have a husband who know where the kitchen is!

How wonderful to see a girl in a usually male sport. I have zero knowledge of the game, but it must be almost as exciting to watch as to play.

So much fun to watch the grandkids in sports. We don't have hockey in Texas, but football and baseball are the sports to watch...and swimming.

That last one really is a great shot, and I agree: she's fabulous on the ice and in a formal dress, too. Thanks for introducing us, maybe someday she'll be famous and I can say I knew her when. :-)

I love seeing the pics of your grandkids. They are all such a busy lot and GO GIRLS! Love that the girls are playing hockey!

She's a pretty young woman even "buried" in a hockey uniform!

Women's hockey has to be the best in my view. Hockey is played instead of just banging around.

Nice action shots! I especially like your first photo. You must be very proud of your granddaughter.

It's so good to be able to support our kids and grand kids in their activities. And it's fun besides!