Each year the tree on Main Street it lit on Friday evening after Thanksgiving.  You can donate to Hospice in memory of a loved one and  one of the lights will represent them.  We donated in memory of Far Guy’s Mom who received Hospice Care the last two weeks of her life.

This year we both noted that the tree was moved down a bit on Main Street.  I will take a photo one day soon. I don’t recall it being that far down the street last year…but hey I am getting older.

Alrighty then…the tree is always donated by someone.

In 1967 it was donated by Far Guy’s Paternal Grandparents Jim and Tracie.

Far Guy says “It was a beautiful tree and it came from the grove just north of the house.”  he doesn’t remember going to the lighting ceremony.”

We were dating back then and I don’t recall it being mentioned at all.  That was 47 years ago…uffda. 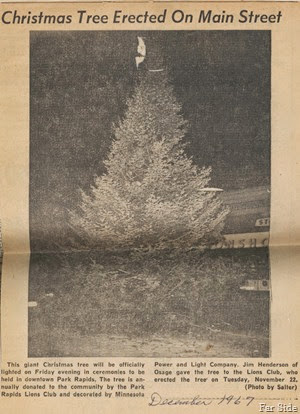 This giant Christmas tree will be officially lighted on Friday evening in ceremonies to be held in downtown Park Rapids.  The tree is annually donated to the community by the Park Rapids Lions Club and decorated by Minnesota Power and Light Company.  Jim Henderson of Osage gave the tree to the Lions Club, who erected the tree on Tuesday, November 22  (Photo by Salter)

Grandma wrote the year and month  December 1967.   I wonder if anyone out there has a photo other than this one that appeared in the paper and was saved by Grandma Tracie in her Purple Agricultural Book made into a scrapbook. 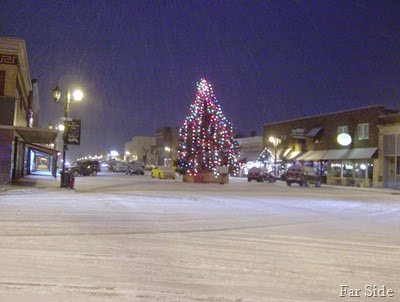 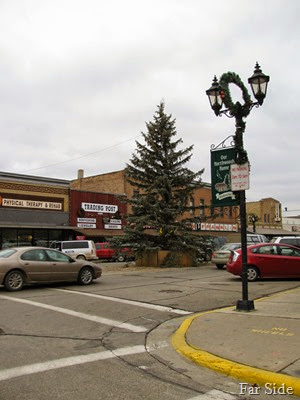 You have until 9 PM my time tonight to make a comment and or a guess to be in the Ornament Giveaway! Here is  the link.

Center stage is a perfect place for that gorgeous tree! Planning to go to our tree lighting ceremony this weekend where the local high school band plays a small concert and it sounds like the weather will actually be "warm" -- 30s, yay.

I have always loved the city Christmas Tree lighting ceremonies. Our area also has the Holiday Train that goes from a city north of where I live to downtown Milwaukee. It makes stops in small towns all along the route.

Gosh, I just realized that you two are three years away from a half century married. How times does fly! Love the big old tree in the middle of town. The season has arrived, for me, since now Thanksgiving 2014 is a memory. :-)

Such a great tradition and young and old look forward to it's lighting. We have lighting ceremonies in my town this Friday along with a parade.

Funny, I like Christmas lights, but have never actually been to a "tree lighting."

The tree Far Guy’s Paternal Grandparents Jim and Tracie donated was a beaut!!!

Those leaves remind me of milkweed in a way. But that can't be it, can it?

Morning, love this tradition, we have the annual tree lighting in the city too. Blessings Francine.

A special tradition and memories.

I love your photo of the tree lit up! In Portland we too have a large tree in our public square.

A live tree is decorated in the Riverton park by the hospice group. I never think to take photos of it. Perhaps, I will this year.

I love Park Rapids! They have the Main Street that's perfect for setting the tree where they do! It's wide enough! I grew up going to Nevis often and we would get to Park Rapids, too and now that I'm a grandmother, I take my granddaughter to your neck of the woods when I have the time. Beautiful, beautiful area! Fun to see the newspaper article and then the two tree photos you took.

I love your town and your traditions as it reminds me of my hometown and all of the small towns across America. The tree looked so much prettier with the snow and the lights.

Old traditions are wonderful. The old photograph of the tree is beautiful, I can just imagine what it looked like in person.

Hospice has a tree like that in our town, too--only it's extremely unlikely that our tree will move down the street any time soon. The tree in our town is a live one--a redwood planted in front of the community college years ago. In a similar ceremony, our tree is lit in memory of loved ones and donations to Hospice are noted next to the tree on a giving board. The utility company has to get a lift in to put up all those lights! Quite the sight, right across from the malls and all the shopping activity. We went to the ceremony once in memory of the young mother of one of my daughter's friends. Beautiful, touching...but sad...

It's nice touch when towns will set up and decorate a tree on main street.

Oops I was on Main Street on Saturday and don't recall seeing the tree... maybe that is why if it is farther down... I better make another trip to town :)

What a pretty tree in all its baubles and a little snow.

How wonderful to have such history in the place where you live. I'm so glad that photo was saved.

What a great tradition! I love Christmas lights. When we were kids we'd pile in the car and drive around town to look at the lights on people's houses. Back then almost everybody had lights of some kind it seemed. We'd top off the evening by driving to downtown Minneapolis to walk around and look at all the Dayton store windows. They had music playing and things that moved in the windows...was a magical children's delight! We were more easily entertained way back then--LOL! But I still love Christmas lights...anywhere. :)

We had a living tree on main street that they use to light up every year. Apparently the city workers thought it was getting to big so they cut it down. Now the live tree is about five feet high. Not to impressive. I really like the one you have in the photograph.