In the olden days many people were married in their homes.

Some were married at Christmas or New Years.  Relatives would come the house was cleaned before Christmas and baking was done….so why not have a wedding or two?

I found this old polaroid and thought…it was taken this time of year. 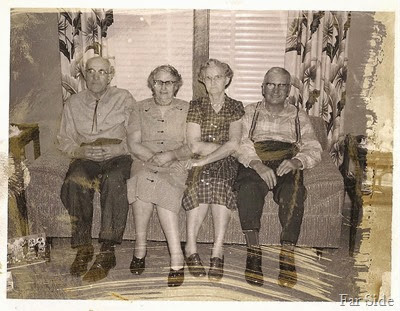 Grandpa Jim, Grandma Tracie, Great Aunt Emma and Great Uncle Rubert.  The two women are sisters born 22 months apart, Tracie in June of 1895 and Emma in April of 1897. This photo was taken at Far Guys home.  I will guess that Far Guys Dad got out his Polaroid Camera and took this photo near their anniversary time.  I wish I knew exactly what year it was. It was taken earlier than November 1968.

So when Tracie was 18 1/2 years old she married Jim on Christmas Day 1913 in rural Logan Iowa on her parents farm. Jim would have been 24 years old. 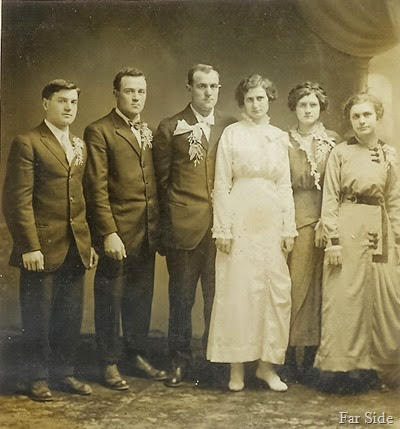 Then the next week Rubert married Emma on New Years Day 1914. Emma would have been 16 years and nine months old. Rubert was 21 years old. 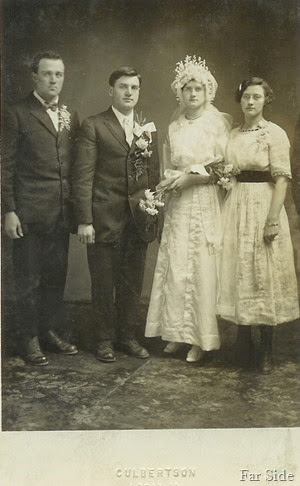 Later in 1914 they would all move to Minnesota, I am certain that these marriages took place so that the group of them could leave Iowa and find cheaper land to farm in Minnesota.

I would bet that Grandma made both of the wedding dresses she was quite an accomplished seamstress.  The Bridal Bonnet that Emma is wearing always makes me smile…Emma was a bit of a character all her life.

Jim and Tracie celebrated their 54th Wedding Anniversary before Grandpa died in 1968.

Rubert and Emma celebrated their 67th Wedding Anniversary before Rubert died in 1981.

Emma's bonnet is really amazing, and she is so young to be married and off to buy a farm in Minnesota. Can't imagine any of the 16 year olds I taught being mature enough for that! Happy New Year to you and your family.

I kind of like that bonnet! And they did have full and very long lives, it seems. Thanks for sharing these two sisters with me. I'd have liked to know them. :-)

Love the bonnet. Many of my mother's relatives married very young and lived on farms in Southeastern WI. And most of them lived well into their 90's. HAve a Happy New Year.

I just scrolled down to your post about blogging for 7 years and hoping the grandkids would have a good read someday. Are you aware of a site called blog2print.com ? You can go there and have a book printed with as many/as few blog posts as you want. It's really a no-brainer and it's so nice to have the posts & photos put into a book with such little work on your part. I've had about 4 of them done and I love them.

They give you several options as to how you want it formatted, so there's a little leeway. It can be pricey if you get a year at a time done, but when you consider the cost of scrapbooks, punches, decorations, scrapbook paper, your time, etc., it's actually not a bad deal.

Check it out and see what you think. My blog is imagesisee.blogspot.com if you'd like to take a look.

I wondered about that headpiece since her sister didn't have one. Very fun and what a way to celebrate holidays that year!

What fun photos....I love Emma's headdress for the wedding!

Looks like the guys never even got out of their formal wear! The wrinkle in Rupert's sleeve is unchanged!

That period is one of my favorite as far as clothing goes! Great photos.

Once upon a time the LA County Museum of Natural History had an exhibit of wedding dresses that were very old. It was fascinating to see the delicate hand stitching on many of them -- even the ones that were rather plain looking, and how "small" they were compared with so many of the dresses seen today. Loved the picture with the wedding bonnet. How fun!

Love these old photos! Interesting stories. Happy New year to you and your family!

Weddings were certainly different. White dresses didn't appear here until much later. My parents were married in Grandma's house. There were no attendants and I'm not sure if thee was any feast.

Loved the wedding photo and reading about your relatives. I miss my older relatives and hearing their stories.
Happy New Year to you and yours!

Such wonderful memories along with the pictures.Blessings Francine.

I almost feel like they're part of my family as I get so caught up in their history and photos. That couch looks very familiar as my Aunt Bernice and Uncle homer had one that looked like that. Theirs was gray and Uncle Homer liked taking a nap after Sunday dinner on it. I had to be quiet and when he woke up we would go for a "spin" in the car...mostly to check fences and cattle. Uncle Homer had a butcher shop and the only time he took off was Sunday afternoons and he was usually open until 7:00 p.m.M-Sat but Aunt Bernice helped him. They had 2 farms also that their son ran. Aunt Bernice would cover for him at the shop if he needed to go to a cattle sale etc. She could cut meat with the best of them.
Sorry...didn't mean to ramble about my family...that couch just brought up all kinds of memories! LOL!

Nobody is smiling in those wedding photos, lol!

Love reading about your ancestors- blessings to you and yours and Happy New Year.

I love this...including the mandatory smear in the Polaroid photo! This reminds me that after you said you were thinking about cutting back on your blogging I realized that you have several blogs, and sometimes I neglect to check the others. You could combine them...just a thought. Happy New Year.

awesome photos!! Where in Iowa did everyone come from??? (I'm still there!)