Far Guy had a Great Aunt Charlotte, she was married to Great Uncle Herman in 1931.  A good match, they complimented each other well.  I seem to recall that they snuck off to get married and didn’t tell anyone for a while…they snuck back and continued on with their lives just like normal. Uncle Herman was a Popsicle salesman and Charlotte had a job where she couldn’t be married. (Far Guy says she was either a teacher or a Dental Hygienist) 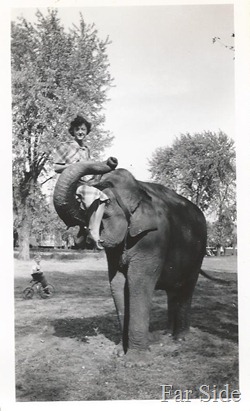 Recently cousin Roxie shared this photo with me.  I am certain the photo has a story..I wish I knew what it was.

During the war years (1939 to 1945) Herman and Charlotte were there to comfort Far Guy’s parents while they endured the loss of their premature twins, a boy and a girl born way too early(1943).  They all lived in Omaha back then. Both would eventually become parents of little girls in Omaha. Roxie for Herman and Charlotte and Janice for Marvin and Evelyn in 1945.

When Far Guy was stationed at Lowry AFB in Denver (1973) we visited often with Herman and Charlotte in Colorado Springs..usually on Sunday afternoons. It was nice to connect with relatives when you were far away from home. 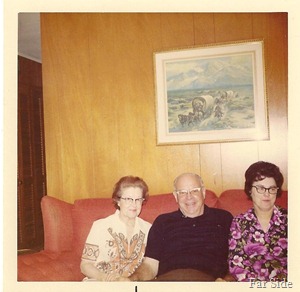 I helped Far Guys Mom pick out that blouse (what was I thinking..she had slacks to match..solid color of course..and polyester.)

Charlotte and Evelyn were two peas in a pod..every hair in place, perfectly dressed at all times..they both wore aprons in the kitchen, and both were excellent cooks..that used linen tablecloths and good silver. They washed their dishes in a certain order.  Glasses and cups first followed by plates, serving bowls, silverware and pots and pans.  Pots and pans were dried with a different towel.  The special bleached white flour sacks with the cute embroidery in the corner never saw a pot or pan.

Marvelous women of a different generation:)