The weather is warm. Makes me think of making hay on or around the 4th of July.  I can almost feel the twine on the bales digging into my hands..making blisters. I know I can feel the scratchy hay chaff settling down everywhere I was sweating..especially right down my shirt.  My legs would be covered with the telltale signs of hay making..scraped and red in places where the stiffer stalks would try to puncture your skin.  Of course a simple solution would have been to wear pants while making hay..but it was summer and I was a kid.  I could pick a bale up off the ground and get it onto the hay wagon to be stacked.  Some of those bales were pretty heavy.  I won’t mention the mess a bale makes if the twine breaks.

Hay making has come a long ways since then…at least we had a tractor and a baler. 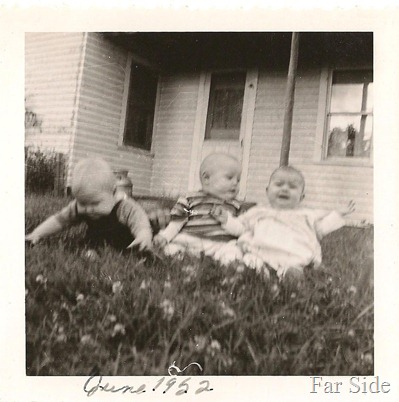 Me and my Uncle Kenny and my Aunt Karen.

It looks like Kenny has irritated Karen and I am heading for my own adventure.  We are sitting in the lawn out in front of Grandma and Grandpa D’s house in the grass which has clover..which made me think of making hay and the 4th of July.  Some days my mind is round about like that:)