Last Fall the Military Room was painted.  Previously it was very blue. The paint was procured through a grant from Valspar and all the painting was done by volunteers. 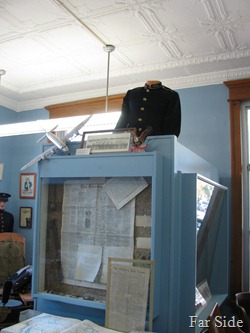 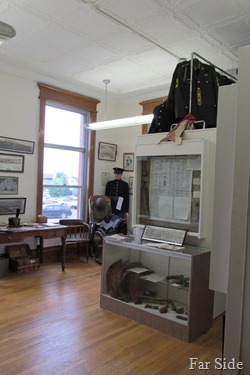 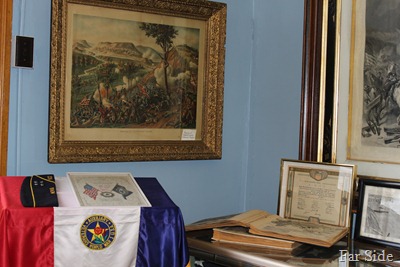 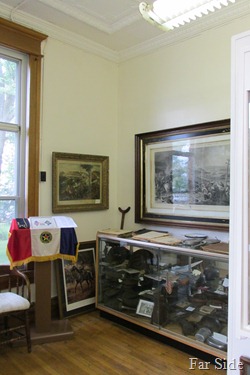 Far Guy worked really hard getting all the pain specks off the oak floor. More uniforms were brought out of the vault and displayed on a clothing rack. One of the displays will be redone with Minnesota’s 2nd in mind.  A volunteer Civil War buff is working on that display. I am not involved in THAT project.

The museum has an extensive Civil War Collection.  WWI and WWII are well represented.  Korea and Vietnam not so much.  I am on the lookout for Women’s Military Uniforms..we should have at least one..just my opinion. (Children should be able to see that both men and women are in the Armed Forces.)

In my “findings” at the museum, I found a journal from a POW during WWII that lived in town.  I have not read it yet.  We also have a Civil War Journal from 1862.  We have a good collection of War Newspapers.

The next thing that needs to be done in this room is to redo the signs.  All the descriptive signs are so old worn and faded soon they will be unrecognizable.  I also have three more flags that need to be in flag cases.

Through grants we were only able to raise half the money needed for Ultra Violet Filters for the windows in this room.  Since that disappointing news I wrote five “ding” letters to area American Legions and VFW’s and their auxiliaries asking for help.

The museum applied for a grant for $6,300 to cover the cost of having a HVAC evaluation of the historic building.  It is the first step toward heat and or air conditioning.  The evaluation will tell us what we need which in turn will help us to write yet another grant for those needs.  Once we get heat and air conditioning in place there is no money for those added utilities..seems like a loosing battle.  A long time ago the museum had part of a mill that they used for operating expenses..and somehow somewhere that mill was taken away.  The New Courthouse is going through a multi million dollar renovation but I cannot get funding for thread bare carpeting or even the $100 Fire Department Key Box that I asked for almost a year ago. ( One of the Commissioners who said “Let it burn” was not re elected..tough patooties.  When I heard the news I cheered..I am a mean old broad sometimes.)

Some days the struggle seems to be too much.  I get discouraged. I should look at the improvements that have been made slowly one by one instead of what still needs to be done.  The summer is almost half over, which means I am that much closer to the last day in September when I close the doors for the season:)