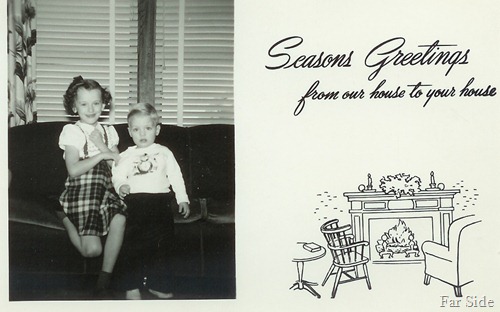 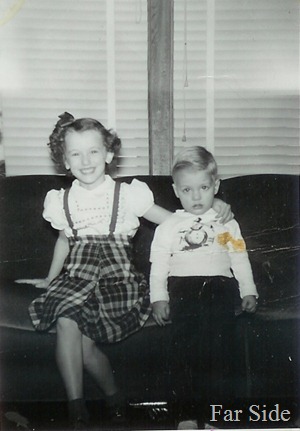 Oh, I remember those Christmas cards. Our family never sent those kind. Mom always used the traditional cards. We had 'rich' neighbors who would send them out year after year. I was envious!!

Awesome photos ! Have a good day !

My mother always sent out Christmas cards, but we never had any with us in them. I don't remember that we received many, either, but I could have forgotten, it's been so long ago. :-)

These are so cute. How is Gene feeling after his last injection?
Merry Christmas to you guys.

Very nice, I bet he was a great kid for the two stage,(maybe?).

Love seeing your trees, I have antique ornaments but not that many. Also too many decorations to get them all out and put away. Understand. linda

I remember those cards. We sent a similar one when our children were small.
I love old photos!

How sweet is Far Guy, so cute.....Love to see those old Christmas photos....... Thanks for making me smile, sure need that right about now, Enjoy the day, Hugs Francine.

OMG we have some of those old Christmas cards and photos too. Many with one or the other of us kids looking rather angry! Go figure! We have ones that are in the same mode taken at Easter. LOL Makes me laugh now!

Cute! Far Guy does not look as happy as his sister about all that:)

Yes, I remember this type of Christmas card. Really neat that some of them were kept.

This is making me melancholy...I just found some old greeting cards like that in a box stowed in my closet. Sometimes, these cards are so old, it's hard to know much about them--other than that they meant something important to a family member. This holiday season is so full of memories--even memories of people who are now long gone...

Yes, I remember them, but mostly in color. I still get a couple of cards from people who have family photos on a card like that. :)