Pictures with Santa.  That was a pretty big deal.  We used to go to a shopping center in South Moorhead to have the photos taken.  If we felt we could afford it then we would go to West Acres..Santa photos were more expensive there.

Since we only had one vehicle back then and Far Guy needed the vehicle to go to work, we went in the evening after supper and  hoped that everyone would be in a good mood.

Sometimes the Santas were just not very good.  I suppose it is a terrible job..holding screaming kids most of the day. 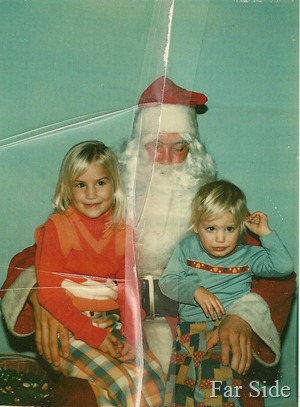 1977 Trica was five and Jennifer was two.

Someone who was not real cooperative at the photo session ripped this photo in half.

I patched it with scotch tape. 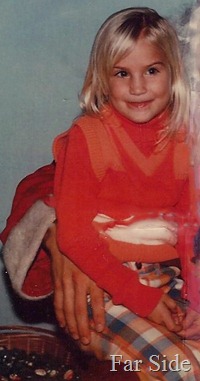 Miss perfect was just that perfect because she was five and knew all about the naughty or nice list. 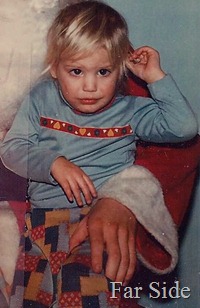 Miss not so perfect didn’t care ..she was scared to death.  In this photo she is just beginning to do her stiff as a board and I will scream bloody murder until my Mother rescues me..then she would twirl my hair in her fingers and put her thumb in her mouth until the sobbing subsided. 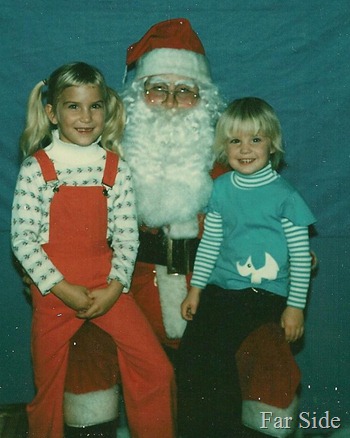 In 1978 Trica was six and missing her front teeth and Jennifer was three. Do Trica’s bangs look a little short to you?  At Thanksgiving that year..I was packing and not paying much attention..she asked me if she could cut her bangs because they were in her eyes..I apparently said “Yah” or some such positive word of encouragement/permission.  She took a scissors and laid it next to her head and cut..her bangs were really..really short for a long time.

I tried to think back what would have been some of the things they asked for..Weebles..a baby doll..a Spirograph..silly putty..Play-Doh…Legos…the Fisher Price Barn and Animals and of course Barbies..

I recall that The Operation Game was a big hit with them! :)

Some of the best stories about the old days come from the not so funny stories when they happened ones. Miss Not-So-Perfect reminds me of Beverly Cleary's five year old Ramona in Ramona the Pest but little Miss was only two. Looks like she was way past her "Ramona" days by the next year.

Maybe it was her pants...and she didn't want proof of that wardrobe when she was 37!

Oh its so fun to look back and cherish those days. Even though at the time, we didn't think they would ever end!!! Were your girls of the era of Stawberry Short Cake That was always big at our house.

They grew a lot from one picture to the next. And they did look a bit happier in that second picture. Maybe they figured out they would be receiving the presents they told Santa about and that's why they are happy. :-)

I love those pictures and oh the memories of asking for those exact things. It was a loooong time before we got the Operation game.

Love the photos and memories.

That was one of your best outfits..it was a Health Tex and I think you got it for your birthday..it never wore out and it washed like a dream.

Great photos! I remember Health Tex clothes, well recognize the name. I think my sister supplied us with some of those. Those are some pants!
We only have one photo of our kids with Santa. That was taken at a local community hall at a small Christmas party. Generally they had no desire to go and sit on his knee and talk to him. Remembering my own childhood fear of Father Christmas, wandering the shop in his long red robes, one year way back in England, I had no interest in forcing them.

Wonderful photos and memories . I went to England one year when I was 5 for Christmas with my mum and dad and spent it with my Nana and family over there , I have the photos of my Nana and I in our dressing gowns ( robes ) opening gifts in front of the tree . My kids only had their photo taken with Santa once at a mall. Yes those toys were quite popular over here as well . Have a good day !

Well, if you hadn't pointed out the short bangs I would have never noticed. You couldn't really miss pictures with Santa and with you examples you show why.

Cute pics. In 1977' my Geek Son was three and pulled Santa's beard off. I do believe it traumatized one little guy standin' in line for lift!!!

How did we ever get along with one vehicle???

God bless ya sweetie and I hope your havin' a marvelously blessed Christmas season. Enjoy!!! :o)

Great memories for you guys.

Cute! And look at those long legs! Jennifer looks like the next year she found out about the "naughty and nice" list too! Ha! Ha! Smiling to beat the band that next year. What precious girls and memories. You should have them go now and get their picture taken together with Santa...that would be cute!

Priceless!
Dagan cut his bangs once, too. He didn't ask--LOL! ;)