It looks like a Shiny Brite bomb went off upstairs.  Boxes of Shiny Brites covered the table, the beds and the old trunk.  One by one the boxes were emptied.  I have little post it notes in the boxes so I know what goes where when I pack them away again. 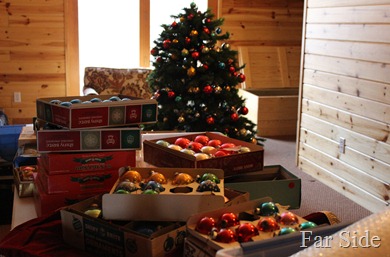 The top half of the tree gets decorated first.   You can see my tree coffin in the background…it is open. Ha!  The trunk is also open..yes we had Shiny Brite overflow and the coffin is no longer large enough to hold the tree and all the Shiny Brites.  I even made myself a note last year..it says “Check the trunk for more Shiny Brites.” 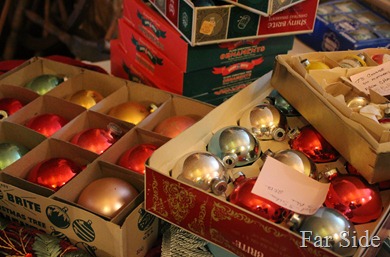 Far Guy found the box of extra large ornaments on the left at an antique shop..even if the box had no cover it was a steal at $11.50.  I only had one ornament that size..now I have 13. The other “new” boxes were ornaments from Chance and four boxes from garage sales. I splurged and bought a box of reproductions at Menards the other day..I now have three boxes of them.  I will probably quit buying them when I have five boxes..one for each grand.

The box with the red, silver and silvery blue ornaments had a whole bunch of tinsel twirled around the ornaments.

I wonder..were they taken down in a hurry..who was the last person to put them in the box?  Were they put away for a long time?  Did their owner no longer want them..or was she too old to decorate a tree..perhaps she died and no one wanted her “old” ornaments..perhaps she was a he..men like Shiny Brites too! I had lots of time to wonder whilst I decorated the tree.  It takes a few hours half the day.

I am almost done. The top half joined the bottom half without too much drama.  I have a box or two of ornaments left…and then I can re coffin the empty boxes and clean up my mess.  Far Guy says it looks real pretty..and Chance already wagged his tail real near it when he was visiting me upstairs:)