Five years ago I began to blog.  It began as something to do in the dead of a Minnesota winter and a way of leaving just a small part of me behind for my Grandchildren.  In the beginning I expressed many of my personal opinions and beliefs.  I think I still do to a certain extent..I am passionate about Minnesota..both the good parts (Spring and Summer) and the bad parts ( freezing weather and ticks.)  I enjoy Wildflowers and “old stuff.”  Five years ago I had one blog.  It appeared locally in the online newspaper in a section called Area Voices.

In September of 2008, I got nervous about the Area Voices blog suddenly disappearing so I began a blogspot blog. My Area Voices Blog is still there, it appears in online newspapers throughout Minnesota and North Dakota.

Today, I write a weekly blog for the Hubbard County Historical Museum.  Yes, I get paid to blog!  When I first started blogging I thought wow wouldn’t it be great to get paid to do this?

Many people write blogs that have banners and advertising..and I suppose they get paid..I always find those blogs with ads to be distracting.

I write Far Side of Fifty on blogspot and Area Voices, both are the same blog post just different formats.  Area Voices is Wordpress.

I have a photo blog called Far Side of Fifty Photos. It seems to get lost in the dust some weeks..but I still like to take photographs.

I write Forgotten Old Photos which began one day from a box of old photos that I purchased in an antique shop. So far I have presented 1090 old photographs and returned 128 photos to their families.  It was chosen Blog of Note in November of 2010.

I also write a family blog about my husbands Grandmother called Tracie’s Treasures which is available only to family members. Yes, you can write a blog and restrict the readers. After the first of the year I will get back to that one!   I had to have some time off during the summer and fall..it is a blog worthy of my full attention.

You can also write a private blog..I don’t have one  of those.

I use Live Writer to write.  It is a simple tool to use..non complicated and reliable.  I write at night..instead of watching TV..sometimes whilst watching TV.

My daughter Jen gave me a Christmas gift. 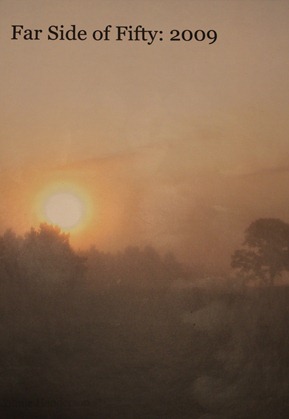 She used blurb to create one year of Far Side in a book.  I cried.  She strives every year to make me bawl at least once during the opening of Christmas Gifts.

I enjoy blogging, and I really enjoy reading a variety of blogs throughout the world.  You all know who you are..I leave you comments occasionally..thanks! :)