Fall is visiting and a TN Update

Fall came a visiting yesterday..and is going to stay for a long weekend.  40 F or 4 C.  The snow is melting:)

Forty degrees in December is something to celebrate in Minnesota.  I sat out in the yard in my shirt sleeves with no coat.

We had a busy day yesterday.  We left before daylight for a long drive.  To a Trigeminal Neuralgia Support Group Meeting.  Far Guy felt like he learned some things and his feelings toward Doctors, medication and the frustrations of TN were validated.  I kept telling him he was not nuts and I was sure that other people shared his feelings..and they do.

No one within the group has had the Steroid Injections in their face..nor had they heard of the procedure.  They made lots of painful looking faces when Far Guy described the procedure. The long needle and the pain he endures during the procedure.

Far Guy’s last injection was on September 20 and it did nothing.  Or at least that is what Far Guy says.  I think it did something, it kept the painful zaps at bay but not the everyday pain.  He is scheduled for another injection soon…he has had it with the zaps..which lately have brought him to his knees and unable to speak.. it is time.  Perhaps this is the injection that will keep the pain at bay for six months or more..other people that we know are pain free..so why not him?

The guest speaker at the meeting was a Neurologist, she seemed to have different opinions than our Neurologist.  She refers most of her patients to the Mayo Clinic..and most end up having some kind of “procedure” which may take the pain away for awhile..but many report that their pain is back.  One lady there said that she has been pain free since starting her one tablet of Tegretol a day and that the rest of us were scaring her.  One poor fellow is bilateral..he has TN on both sides of his face and has had it for 16 years. Another fellow had a “procedure” at U of MN that made half of his face numb..so he cannot tell if he is drooling or his nose in running. He seemed happy to be numb..he was the only one who saw the same Doctor H. that we saw at the University of Minnesota several years ago..the Dr. H. that told us “Anything we do to you would probably make you worse.”

And so it goes.  We were happy that the weather cooperated to make it an easy traveling day.  After the meeting Far Guy dropped me off at Menards and waited for me whilst I ran in and purchased a gift that our local Menards was out of.  Five minutes..in and out which included waiting in line..speed shopping at it’s best. Twenty- three shopping days left..one package down and who knows how many to go:) 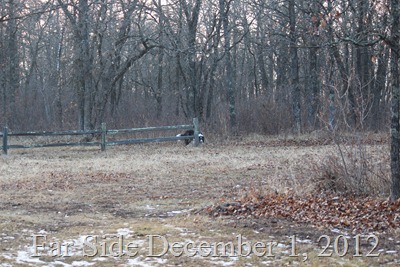 I'm thankful you two had a nice day for driving. I pray that this injection will give long lasting relief to FG. I love your photos...I see Chance in that last one.

How frustrating. My Mayo neurolgist diagnosed cervical dystonia (it causes my head to shake and turn to the right) but there is little pain so I passed on the botox...

So happy the weather cooperated for the travel.......pray Far Guy finds relief the next time.............I also started my Christmas shopping this weekend, Yey........Blessings Francine.

He did have some temporary relief from one of those injections, didn't he? I am hoping this next one will be the magic bullet. What a tough row to hoe he's been given. Wishing some relief will come his way soon.

Weather is all over the place, everywhere. Just like in the summer.
Good luck and God bless. ♥

Hugs and good wishes to Far Guy. I think someone had a weird sense of humor to present so many frailties to the 'over fifty' crowd!
Congrats on the first present. I kinda feel the same way. I got two folks taken care of - but have so much left to do, and I'm not looking forward to it!

It's always the first gift that is the hardest...then it's all easy peasy from there.

I am so hoping that Far Guy gets relief this time...it's his turn for success.

It helps to know you're not alone.

This weather is still crazy. Maybe crazy is becoming the norm.

Hoping Far Guy will find relief one of these days. Weather is very mild here also.

Support groups for specific illnesses and conditions are priceless as they provide validation and education. I'm glad you were able to find one in your area.

I am so sorry that Far Guy continues to have the awful TN pains. I myself had a Balloon Compression in 2001 and it took away the horrible pains but left me with numbness sensations on the right side of my face and scalp, times of itching, tingling, etc. but at least not the shocking pains of before.

I read that there is no treatment for my present feelings except taking drugs to diminish the sensations. I prefer to let well enough alone because things could get worse and they are bad enough already. The sensations never cease day or night. At least I can sleep.

Far Guy, my understanding and sympathy for your suffering. I wish something would work for you. The pains do indeed bring one to his or her knees and they strike at unknown times. It is truly like being struck by lightning.

I wish I had a support group but have not heard of one near here in Edmond, Oklahoma. I used to live in the Twin Cities but moved here a year ago.

You can take the girl out of MN but can't take MN out of the girl! I read the blog every day and many of the recommended ones and enjoy them all. Thank you for this great reading every day Far Side.

I do hope Far Guy finds relief very soon for all of this . The temps are 11ºC or 51ºF and raining like crazy very strange for this time of year here !

Hi Shirley, Far Guy says "Hi" and thanks for the good thoughts! We know you understand all about this horrid TN. The support group we went to was in St. Cloud. I hope you find a group to get involved with..we totally understand about not making things worse..sometimes it is difficult to know what to do. :)

So sorry for Far Guy's pain. I hope he finds relief soon for it. I didn't know what TN was so I googled it. How awful that must be. Hoping the next injection keeps him pain free for a good long time.

So many horrible diseases and disorders that make people suffer and searching for relief. I certainl will look at my little pains with a whole new light.

TN is a horrible thing from what I have read. I am soooo sorry he has to experience this. Have you all been to Mayo Clinic yet? I went on their website. Did anyone talk about the Gamma Knife Radiosurgery? I don't know what it does to your face - - or how the results are. That seems to be their best option from what is written - - but it would be interesting to talk to some who have had it.

Yes several have had that procedure and their pain came back. No we have not been to the Mayo Clinic..we went to the University Of MN instead:)

Disappointed to hear that the last treatment didn't do the trick like that other one. That must be horrible to live in constant pain. We will need to get back to praying for him!

Well, I heard from a friend who is traveling in Mexico that there is a heat wave there right now. By the time it all got up to us, we got lots of rain with 60 degree weather. I imagine that would be just about enough to send your mercury up to at least 40. Isn't it nice when stuff like that gets shared? ;)

I pray that the injections do the magic trick this time--for a long, long time, too!
Yes, 40s is amazing in December up here. Heat wave!! Enjoy! :)

Thanks for filling us in on some of the detail with Far Guys situation. It seem that there are far too many things that medicine can not do anything about. Groups that meet like this can certainly reaffirm some things that need validation. Sometimes we think we're the only ones with these symptoms and we're not.

Poor Far Guy! Tell him I feel for him! We are supposed to have almost fifty this week, and that is unusual for us also in December!

Support groups really do provide useful information as well as reassurance that you're not alone. I hope Far Guy finds some relief from the pain.

Oh, TN sounds just awful and Far guy in so much pain that it brings you to your knees...that's bad alright! My heart aches for him...pain is no fun. What is that medicine/tablet the one gal said she takes? Has he had that? Maybe he needs more of the steroid since it doesn't seem to work...does it go by weight? So many meds do. I was on heavy duty steroids for several years because of my RA just so I could move but they're not good for you but I survived but I felt like the incredible hulk and looked like him too! It might be ok for a guy but I was pretty scary looking! But I could move and function so what did I care. There are so many awful diseases and afflictions out there and TN sounds like a real bad one. I pray they find something that works for him.