This is an old family photo.  We are not sure exactly who it is.  We think it might be Great Uncle Herman.  I wish we knew for sure who it was.  It is a marvelous old photo. Update: Cousin Tom is fairly certain it is Great Uncle Herman. Where: This photo was taken at the Headwaters of the Mississippi River up in Itasca State Park. Why:  Because it is traditional that someone take photos of you when you walk across the rocks.  When:  Well preferably when there is no snow or ice.  When was this photo taken..I will guess sometime in the 1940’s or early 1950’s in August. 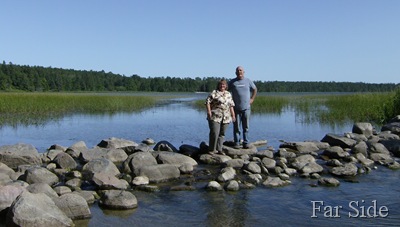 Yes, August..the weed beds are very similar..so I think August.  This is a photo that I took of my husband and a very good friend Sue.  She was thrilled to be able to walk over the Headwaters of the Mississippi in August of 2008.

Tourists coming into the museum sometimes ask “What do you recommend seeing in this area?”  I always encourage them to head to Itasca State Park during their stay:)

That would be a wonderful place to see...beautiful.

I love your Wistful Wednesdays, not just for the pictures, but for your story about some part of the world up there.

The people change but not the landscape...interesting stuff...

Tom is fairly sure on Uncle Herman. He has seen the photo before.

I love the old and new together. It looks like a bit of magic and I needed that this morning.

I'm thinking that the biggest rock at the back on the right in both pictures is the same rock:) Cool!

I visited the Headwaters at our family reunion in 2006 and agree that Itasca State Park is a great place with wonderful trails for exploring and biking.

I agree with Karen - how neat to see the same rock, in the same position!
I've never been to the headwaters, but it looks beautiful.

My dad has a book with "then" and "now" shots taken in Colorado by father and son. It is fun to see what is the same in the pictures and what has changed.

I would love to visit that place !
Awesome photos ! Have a great day !

How wonderful! That is someplace I would definitely like to see some day. :)

Makes me home sick...Thank You for the picture

Dear Far Side, I just had my One Year Blog Anniversary and you are my winner.
I have a gift to send to you.
You can contact me....Sam Starr by e-mail, just go to 5 Starr's Farm blog.
talk to you soon.

I have a picture of my grandfather there when Candy was just walking so it should have been 1952. Norm and I went there in about 2000. Neat area!

This is very interesting I would like to see this for the only way I know the Mississippi River is the big old muddy when it gets to Memphis Tn. We have lived most of our lifes not far from the river. The only time not close was when I live in Rhode Island and in Texas.

How deep is the water there? Beautiful blue water!

I wish we had known where the headwaters were when Tom, the children, and I visited Minnesota several times in the late 70s. I didn't realize how long ago we were in Minnesota until I started writing this.

I remember my dad talking about the headwaters.