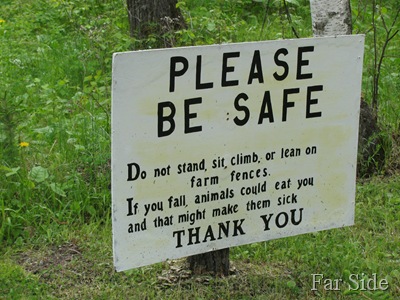 I am writing this late Friday Night.  The Grandboys are coming to visit, bringing their parents and their dogs. They are going to put the pontoon in the water..I hope to go out on the lake on Sunday..God willing and if it doesn’t rain!

The Museum is having it’s annual fundraising dinner on Saturday night..when you read this it will all be over. After working all day and then going to work at the dinner my feet will be tired along with the smile lines in my face. I won’t be able to remember half the peoples names, but I will have smiled and made them all feel welcomed and special.

I am much better at organizational things than I am working directly with the public.  Far Guy has been entertained with my impressions of some of the people I have encountered.  Today an old lady stopped by and said that I should know about anything and everything in the Museum because the last curator did.  Whoopee.  I find that the men are much kinder than the women.  Some of them are just old biddies.  There I said it..I must smile at old biddies. I DID NOT ask her if she would like to become a volunteer.  I think instead of looking for a little old lady, I am now going to look for a little old man to be a greeter.

I had some really nice visitors this week, my niece Katie stopped by, and Far Guys cousin Bonnie, both were impressed with the museum and said that they would be back. I met a Veteran who may be interested in adopting the War Room along with his friends, I am meeting with them next week to discuss the possibility.  I visited with an elderly gentleman who used to be a surveyor who gave me information about some of the old surveyor tools.  I had a Grandma and her second grade granddaughter who was so excited about her visit to the museum on a school tour that she just had to bring her Grandma.  I talked with people from California and people from Oregon.  Some did research and some just reminisced about what they remembered about Park Rapids with tears in their eyes.

So I will forget the comments from some old biddie with her panties in a knot and think of the all the people that were touched positively this week:)

I loved that sign!! LOL!
This sounded like a lot of fun. I love visiting museums and learning about history.
Thanks for this early morning laugh... loved this post!

That sign is brilliant! Hope your fundraiser and smiling went off well... We have old biddies over here too - I just ignore them.

Your job sounds just perfect for you. And you can just chalk up the old biddy's comments as coming from someone who only knows how to complain!

It sounds like you are settling in and making this job your own. And I'm also glad that your blog isn't suffering at all... just loving your frequent posts.

Maybe you won't want this "old biddie" as a greeter either!!! lol
I can just imagine all the people you meet, but yes, the good do outweigh the bad! You've doing great there. Chance was happy to see me yesterday, not so much the other two!
See you soon jo

Sounds like a great time though ! Yes I worked with the public for years and sometimes I swear they just let them out for the day to be nasty and bitch and complain lol but the majority of folk were great I just smile and say very happily" have a good day" and that usually put them right lol Hope your Sunday is wonderful !

I have an aunt who is older and considers herself "in the know" about things. She is an old biddie too. Although for some reason I love her dearly and always have. I'll say something and she'll turn it until she is right and I am wrong. I just listen and wonder what motivates her? :) So glad you had fun and enjoyed the day.

Your Lupines are beautiful. I know you are going to have a great week-end.
Patsy

Great, and did you respond, "well do YOU know everything about this museum?"

After all that is does sound like you are having a relatively good time...notice I say relatively. It must have warmed up there somewhat.

Yes. Yes. Forget the old biddy with her panties in a knot. ;)

I think it's good to ignore old biddies.
Hope your feet have recovered! :)

At this point, you should be on the lake or coming off it. I hope your day has been wonderful and that you weren't too tired after the fundraiser. The more important thing is I hope you made a lot of money!
Yes, there are some challenging people in our lives. One thing we have discovered is it seems the ones who are the most challenge generally have some kind of problem or disappointment they have not resolved. However, understanding them doesn't make it any easier to deal with them!!!

Sounds like you have a good positive attitude--positive that old biddy needed to go home and take the knot out of her panties. I'll bet the museum is flourishing under your care. Good luck, stay off the fence and don't let the animals and old biddies eat you.

After working with the public I decided that about 1 person in 100 is a little bit difficult, and 1 in 1,000 is out to ruin your day. The trick is to let it go and focus on the positive, happy ones. And I suspect that if you stay a while, you just might know about ALMOST everything in the museum!

Old biddies seem to be everywhere..they are the worst!

Some people say the darnest (or stupidest) things. I'm sure you are doing a great job smiling and nodding.

You can't please all the people. Fact of life. But for the short time you have been working there, you have done amazing things in my humble opinion. After reading your blog for awhile, when you mentioned working at the museum I smiled at the wonderful perfect fit. I feel sorry for the little old lady with the negative vibes; she is a sad woman. She carries that negativity with her everywhere and wonders why she is lonely. Keep up the exceptionally good work. You have wonderful ideas and you are able to carry them to fruition. Good for you.

Yes, my father in law and a neighbor lady would contradict everything you say not matter what. When you would state fact to them they would say well I suppose as if I don't know what I am talking about. The public is a necessary evil. I just wished the majority were pleasant to work with rather that just a few. I didn't want to work retail after dealing with them with the one summer and the frame shop became such a negative experience.

Some folks just can't help themselves ya know. I enjoyed the sign at the top. Very clever. I wonder if I could do one for the farm animals that read something similar in reverse! I haven't had trouble with folks leanin' on my fences, just eating up my time with a zillion questions.