It is High School Graduation in our area.  It is traditional to host an open house to celebrate the graduates accomplishment.  We went to an open house the other night..right at supper time of course and the food did not disappoint.  Far Guy said he wished he had brought along some take home containers..I told him that wouldn’t be polite. 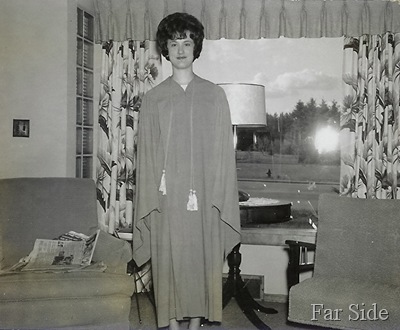 This is a photo of Far Guy’s sister. This photo was taken inside their childhood home in Park Rapids. She graduated from High School in 1963.  She was a perfect “A” student, and on the National Honor Society.   Doesn’t she look smart?  She was an elementary teacher her entire career.  She lives in Indiana, so I irritate her from afar..she is retired.  Far Guys Dad took this photo, I am sure of it; his Mom would have taken the newspapers out of the chair.

Many of those trees in the forestry that were photographed out the window in the photo are no longer there.

There was a bad storm in Park Rapids late on Monday night.  Many trees are down and many homes were damaged. As far as I know,  no one was injured seriously or killed in the storm ( high winds/possible tornado.)  Far Guy asked me to be sure and check on his old home place..it came through just fine, one tree had a broken branch.  The Historical Museum came through unscathed.  I had lots of leaves to clean off the front steps.  The sound of chain saws filled the air the entire day yesterday. Many people are without electricity, and school was cancelled for the day:(

I'm glad you and yours are safe - Far Guy's sister looks really tall and skinny and I guess she was reading those newspapers.

You irritate her huh? :)

Is that picture of Chance in the lake recent? He looks like he is having some fun!

Nice picture of Far Guy's sister on her graduation day. Yes, she looks smart. And pretty. I graduated in 1963 too, in CA. You do a great job as a historian.

Glad to hear everyone made it through without any real problems. The weather lately has been so scary! And I also love your penchant for family history. You show her at the beginning of her career, and now she's retired.

Nice photo ! Glad all got through the storm ok ! Have a great day !

Thank God no one was killed.

Glad to hear the museum came through well, too. :)

It's sad that we can't build around trees instead of just cutting them all down. :|

Hate to see the trees go, but hope they'll be used for heat this next winter...

Good to know that you all are okay after the big storm. Had to laugh at how you knew who took the picture of Far Guy's sister! Similar issues here, except it is not just what is in the fore or back grounds but also how the children are dressed.

Came by yesterday and caught myself up on all your doings, unfortunately blogger was being hateful, lets see how it goes today off of Bet's computer.

The weather is in the news a lot these days. Ya'll stay safe. Interesting to look at old photos. I always check the background in old pics.

The weather continues to be everyone's problem. Severe heat in the south is taking everything out and wind and rain is taking it's toll up here.

Great memories... Take care in the storm! (I'm back from the UK!)

Hello stranger. Its me (troubirder). I haven't been able to comment for some time due to eblogs systemic malfunctioning. I do read your blogs regularly even if I can't comment from far awaaaay..........