"Most of these relationships were forged when the world was a dangerous place and life was uncertain. Couples were forced to confront the profound emotions and passions that come with the reality of separation and the prospect of death."

When couples got married during the WWII, they often wore very practical clothing, the men their uniforms or a suit and the women a suit. If they would have worn fancy clothing or had a fancy wedding when most of the world was involved in a war it would have been disrespectful. Many weddings were planned hastily within a few days of a soldier leaving for his duty station.

From the newspaper..Nuptials Spoken Last Sunday ( Newspapers made errors back then too) In a single ring ceremony performed in the parsonage on Saturday at 4 o’clock…

The bride wore a beige suit with brown accessories and a corsage of white gardenias.

The bride has been a school teacher in rural Becker County, she will continue teaching.  The groom will return to his duties in Fort Benning Georgia. 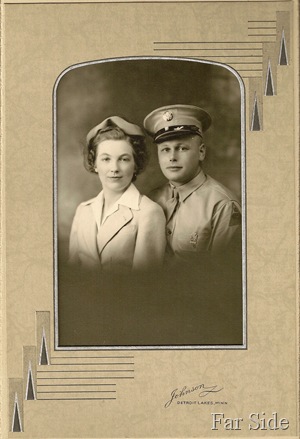 This is Far Guy’s Aunt Marie and Uncle Ernest

Oh ..they look so young! It must have been scary for them, he went overseas and was in the Battle of The Bulge.  He talked about it a few times.  He also talked about driving General Patton one day.  He returned.

They had a good married life, they were blessed with four beautiful children.  Far Guy has many good memories of his cousins, and of his Aunt and Uncle.

A single ring ceremony in the church parsonage..it was all about the commitment, all about the vows before God and their immediate family:)

How poignant and sweet! It doesn't take thousands of dollars and a huge ceremony to make a marriage "take" does it? What a great picture of them.

DJan makes an excellent point - in fact the hyper-excess in the "Hollywood" wedding almost always seems to be an indicator that the marriage is doomed before it starts - I suppose that it is "good" for the economy though.

The bride looks beautiful in that "beige suit with brown accessories and a corsage of white gardenias" and he looks right smart in uniform.

Lovely post. And I agree. It's all about the marriage and the commitment. Some couples nowadays (that makes me sound really old!) could put a down payment on a house for what their wedding reception cost!

I agree with you and everyone else. It is about the commitment to each other, not about how much money you can spend. I know of too many marriages where a small fortune was spent on the wedding only to have it end in divorce a few years later (in one case it lasted less than a year).

My parents had a similar ceremony and he went to war as well and served under Paton.

A wonderful post and photo ! I agree!
Now a days its just a piece of paper to couples I find to them it really doesnt mean much anymore ! Listen to me am I sounding old here, well maybe but Papa and I are some what old fashioned in lots of ways ! Love your new header photos! Have a wonderful day !

How very lovely! They do look young - but hopeful - in that shot.

Faith, love, and commitment are the foundations of a lasting marriage.

Connie.....You said it....."it was all about committment and vows before God and their family". Harriet

Another great old photo, and how nice to read that they are still together:)

Glad he came back. No fru-fru million dollar wedding--just an honest promise of commitment and a willingness to put pride aside in favor of compromise and consideration. (And newspapers STILL make some errors.)

Thanks for stopping by. Hope your own Wednesday isn't too wistful. Where do you vacation in Idaho?

I have very similar looking photos at home...

THe Battle of the Bulge. Wow! My mother lost a cousin in that one. What a blessing to have survived it. You're so right, that the emphasis was placed on the marriage, not the wedding. Thanks for sharing their story. It's a good one.

Happy Wednesday to you all, Far Side. :)

I remember the last week before my daughter's wedding. She said she was tired of the wedding and ready for the marriage. Even though she helped plan it, it involved lots more time and effort than we knew at the start. And as she said, the wedding day festivities were for a few hours and the wedding was for a lifetime. During WWII, they recognized that, too.

Far Guys comment was in reference to his cousin Tom looking very much like his Dad( Ernest).
Sadly Ernest and Marie are no longer with us, one of their children has also passed on...we are the generation left:)

If you love one another it doesn't matter were the vows are taken or how! Lovely story and they are a very handsome couple.

This is well written. I really like seeing them young and they were so well dressed. The experiences he had after this photo taken overseas were things he didn't really want to remember.