Yesterday was our grandson Noah’s guitar recital.  Just like a piano recital..but with guitars.  Noah has been playing guitar for two years.  This is second recital.  He said “I am nervous but not as nervous as last year.” 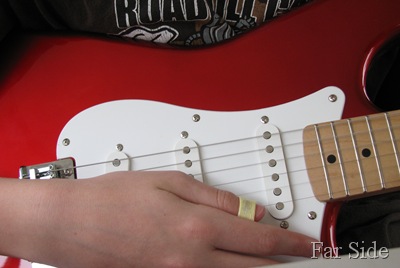 I was happy that it was on a Sunday so that we could all go!  Chance stayed with Miney and Little Elvis..I am sure he serenaded the entire neighborhood while we were gone.

The recital was held at the Fairgrounds during the Greater Grand Forks North Dakota Fair. They had a great set up, with the music instructor and a few other musicians. They played along with the students.

Noah did great and we are very proud of him!  Especially since this time he played his new to him guitar that he had saved up for all year. 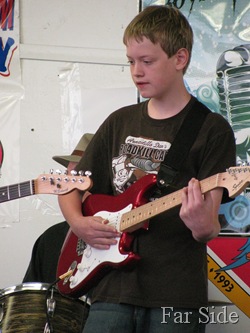 He played an Eric Clapton song..Sunshine of your Love. It was cool..way cool that is exactly what his instructor said.  This Grandma thought it was way cool too:)

How way cool! My son took lessons too. He was good, but didn't stick with it. I think he'll regret it someday. Kudos to your grandson for his two years and for saving to buy his guitar!

Fantastic ! Awesome photos !
yes Miggy seranades the neibourhood as well when we go out lol ! Thats awesome that he saved up and bought his new guitar, our son has been playing for three years and did the same ! Way to go Noah ! Have a great day !

How fantastic. I love that song, but it's just so wonderful to see the next generation coming into their own. Noah looks really good behind that cool guitar that HE bought for himself! Congratulations to everyone.

Such Fun!!! And what memories for you all...

That is so wonderful. My oldest grandson is self-taught and his love of guitar is obvious.

This was a great song to play, Clapton is awesome and so is your grandson. May the love of making music stay with him from now on.

He needs to come visit me and jam!

Payday for grandparents. Congrats to the musician.

How Cool! I love when our grandchildren do such delightful things! He is really a cutie too.

Good for him for buying his own guitar!

Great looking guitar Noah. Is it a Fender?!? Bet he played without any errors! Love recitals.

Hey , Sunshine of your love is one of my favorite tunes. Tell your grandson that I like him already.

Oh, I wish you had a video! Nothing's more beautiful than a kiddo playing a guitar...visions of Clapton rolling in his head. Sweet stuff.

It is so neat that he is learning to play a musical instrument. They keep those skills all of their life. Our boys are trumpet and saxophone players. I would have hoped to learn to play anything as a kid but it didn't happen.

Oh yeah, another Clapton fan. Good for him to aspire to Clapton's excellent technique. Did you get a video of the recital with sound?
Give your grandson a high five from us.

That is pretty neat to have a recital at the fairgrounds! This is the first guitar recital I have heard about. He is a handsome young man and very brave to play in front of a crowd.