These little birds are so ugly that only a Mama and Papa bird could love them.   Far Guy reported a while back that there was a nest with an egg in it near one of the honeysuckle vines that I wanted trimmed.  The nest was painstakingly built in the fishing net that covers the side of the grain bin for vines that climb. He put off his trimming for awhile. I told him perhaps it was an egg left over from last year.  Then one day he reported that the left over egg from last year hatched.  Apparently there was more than one egg laid in that nest, and apparently they were not year old eggs. 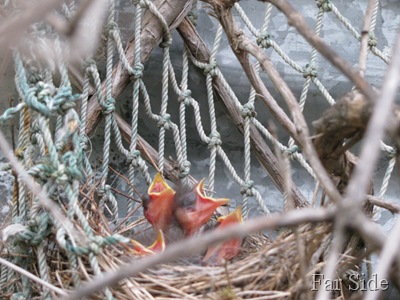 Far Guy thinks that they are Redpoll babies.   There are four of the hungry little things.

I have two blooms on the Fern Leaf Peony that was a gift from Iowa last year! 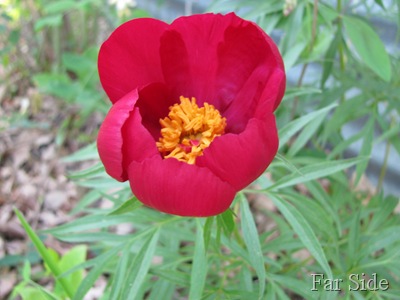 She is a beauty.. I am so glad she survived her first winter in Minnesota.

Far Guys Lilac has two blooms on it this year.  When he planted it many years ago, it was a sorry looking stick.  All I know for certain is that it is a late lilac..most of the other lilacs are past their peak bloom time and this one is just in the bud stage.  I had one of those designer Lilacs “Tinkerbelle” I think..I kilt it. I also have a Japanese Tree Lilac that has never bloomed..but maybe this is her year..it is not quite time for her to bloom yet.

Nearly everyday something new is happening in our yard:)