Last week I was able to sit down with my Father and go through some of the photos in the box that used to belong to his Father ( My Grandfather).   Very few of these photographs are marked. 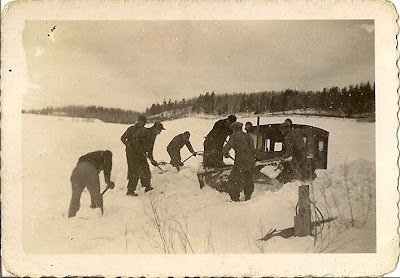 This is an old snowplow..it just happens to belong to one of my Mothers Uncles.  Years ago when it snowed, snow removal was hard work.   Young strong men had to break the hard packed snow in front of the V of the snow plow.  Dad says that this photograph was probably taken sometime in 1938 to 1942.  He also said that he is sure his Uncles, Bill, Joe and Levi are in the photo as are his brothers Jalmer, Ervin and Oscar.   Now that I have them scanned and I can enlarge them on the computer, I will have him look again to make positive identifications.  I believe that I can identify only one person..and that would be my Uncle Ervin. That is only one out of the twelve people in this photo..so much is lost from one generation to the next. ..we have to keep moving on this project! 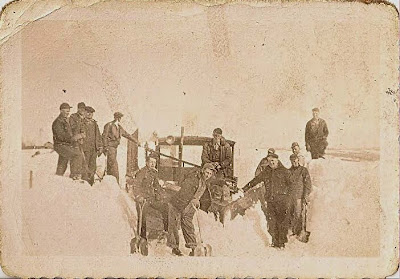 Look at how deep the snow is..that was lots of shoveling:)
Posted by Far Side of Fifty at 6:07 AM