Inside A Dark House

Yesterday Far Guy, Chance and I tagged along with my brother, Jody ( the one that lives next door)  down to his dark house. He was opening up the hole..in preparation for our brother Carey's arrival from Oregon.  Carey and his wife arrived safely..he was here maybe five minutes before he was off to the fish house for some late afternoon fishing. 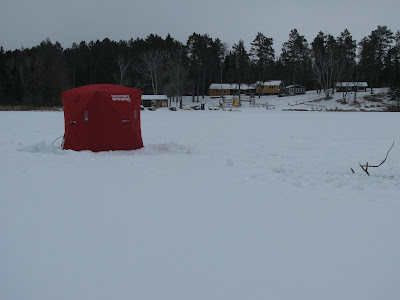 This is the Fish House on the lake. The sticks that are sticking out of the snow on the right are where a fish house sat previously..when the house was moved to a different spot..sticks were put up as a marker so that no one would walk into it.... plus there are some hunks of ice that should be avoided by snowmobilers. 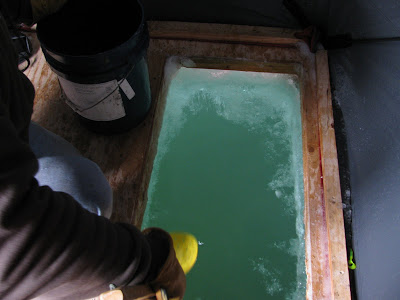 This is Jody, cleaning out the hole with a little strainer..clearing out the small pieces of ice. The door flap was open for this photo. 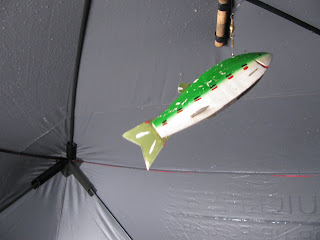 A decoy..snug in it's home on the roof. Decoys come in all colors and shapes and should be good swimmers in the water...there is an art to running a decoy. I personally prefer some nice circular swimming movements and then resting with just a few little jerky movements..you never can tell what is going to lure a Northern into the hole. One of my favorite decoys was hot pink.. 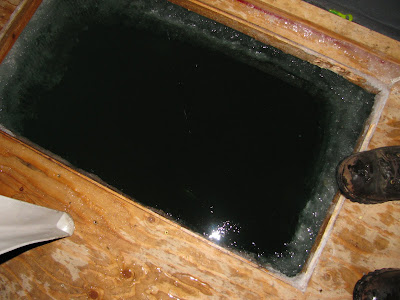 Here is a photo with a flash.. of the fishing hole..when I sat down..I sat in the chair on the left..you can see one of the chair legs. Far Guy was near the door, Chance was warming up his feet by the heater and my brother was running the decoy and manning the spear. Three people and a dog..cozy!! 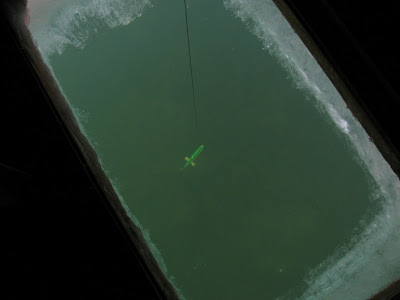 Here is a photo without a flash.. you can see the decoy in the water..you can see the ice depth..it is thicker than it appears. I believe the ice to be about eighteen inches thick. The water is about nine feet deep here. This is the view that will make you a Dark House Spearing enthusiast or not. I do fine..some people are a bit freaked out by it all. 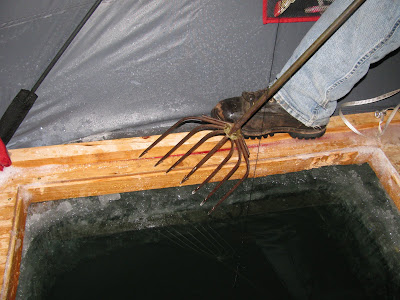 This is the spear at the ready.. 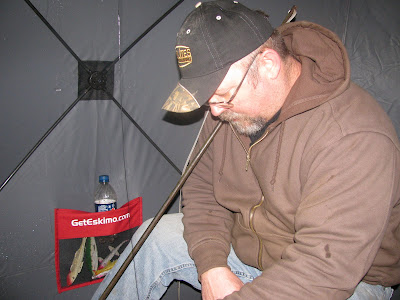 My brother Jody fishing...we were hoping that something would come into the hole while I was sitting there with the camera..no luck.

I hope you enjoyed your glimpse into a Spearing House in Minnesota in the winter. Since I grew up Dark House spearing ..I think that there is no better way to fish. Somehow the danger and the view down into the water has mesmerised me since I was just a little girl.  I find it very relaxing.  I love listening to the lake "talk" ..it moans and groans within it's icy depths..and to me that is relaxing and entertaining.  Dark house fishing is all about patience..and that adrenalin rush when a big ole Northern comes through the hole:)
Posted by Far Side of Fifty at 9:46 AM