I survived the cataract Surgery!! It was a same day surgery and I was over in the hospital about three hours. Far Guy and my Parents accompanied me... Chance held down the fort at home.

The nurses were kind and sweet, they took all my info, had me dress in one of those glamorous gowns. They started an IV, she was really good at it..my hand is not sore at all. Everyone that came into the room marked my forehead. When Far Guy and my Dad came in to keep me company, they took one look at me and began to laugh. I had asked Far Guy before we left if he wanted to be in charge of my camera or leave it at home...he chose to leave it home..but at that moment when he was chuckling at me he said he wished he had the camera. When the Nurse came in to check on the progress of my extreme dilation.. Far Guy was freaked out and would not look at me..no matter what ploy I used to get him to look ..he wouldn't. (The nurse said I won the prize for the best dilated eye she had ever seen.) He did read to me, he knows how much I love being read too..so he read an article about Warren Buffett to me.. a fascinating man! Dr. B came in to say "Hi" and the Anesthetist came in to discuss my anesthesia..I asked him what he was using? He said "Propofal..the Michael Jackson drug." I asked him if he was going anyplace. He said "No, he would stay with me the entire time." I asked Far Guy if I should sign the consent form..he said "Yes" So I did.

The Anesthetist wheeled me off to the OR, where I met four Nurses..it was really cold in there. I knew one of the Nurses a long time ago..Mavis..it was her brother Jody that I had the snowmobile adventure on Bass Lake with back in the 1960's. Anyway the table is narrow but they have a special headrest for your head. They put a pillow under my knees, and strapped down my arms. Dr. B asked if everyone was all set.. I asked him how he felt and if he felt at all shaky..he put his hands up and said " I am calm and cool as a cucumber." Then I felt a burning in my arm..and a strange smell.. then there were beautiful lights..mainly pink ones..beautiful sparkly squiggles and very bright white lights.    The Nurses were talking..and the Doctor was talking about how he didn't like the lens..it kept folding back on itself..I asked if the Handsome Anesthetist was still there and he was.. ( He is my age, maybe a bit older and has a moustache and kind eyes. ) The nurses all laughed, and said "It is obvious that she couldn't see straight with that cataract." About that time I had some discomfort..a pressured poking feeling that I didn't like. I was about to say "I give" .. and then they removed all the drapes and put on a bunch of bandages. They had me sit up and I hopped over to a chair and they wheeled me back to recovery. Far Guy joined me there..and they brought me lunch..a diet soda, a banana and a turkey sandwich. The handsome anesthetist came by, I thanked him and said "Well I never went to sleep."  He said "Oh yes you did..for about four or five minutes."  You could have fooled me.. maybe that is why they call that drug "milk of amnesia." They monitored my vital signs, and Far Guy visited with the nurse who was a very attractive red head..anyone that knows Far Guy well..knows he has a thing for red heads...( I am a blonde/grey haired beauty) any way she was sure she had met him previously. He jokingly said " In jail or the newspaper?" It turns out she was from the Gulfport/Biloxi Mississippi area..now retired to Minnesota. They had a good time talking about that area of Mississippi as Far Guy spent a fair amount of time there during his Military Career. We all laughed at the coincidence. It turned out that they were in the same eating establishment one night back in the 1980's.
( You may say how is that possible that they both remember? The Governor of North Dakota was there that same evening.) After about an hour they let me go home..I got a ride to the vehicle in a wheel chair.

I got home and Chance was very happy to see me. I developed a humongous headache and headed for the ibuprofen and the couch. The pain worsened, it was like brain freeze only a hundred times worse..and moved around in my skull. I had something more to eat and an Oxycodone that belonged to Far Guy. I rested on the couch..until I was startled by some strange flashing lights...it was Far Guy playing Cameraman. 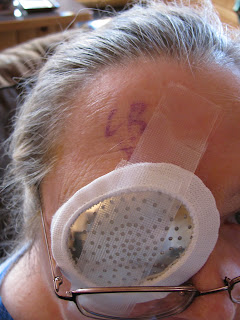 I will be really happy to have the bandages removed ( I have to wait until three o'clock..that is still over three hours away)..they are bugging the crap out of me.. every once in a while my eye itches.  I put my glasses back on right after the surgery..They kind of balance on the end of my nose and let me see something..enough to watch TV.  Most of the time I spend with both eyes closed..it is just easier that way..when one of your eyes has to work independently..it gets really tired.  In two weeks, my other eye will be done..one eye at a time hopefully my vision will improve:)
Posted by Far Side of Fifty at 12:02 PM