Lots of times when I am going through old photographs they are not marked. Sometimes I can figure them out, sometimes not. Sometimes I have no clues. 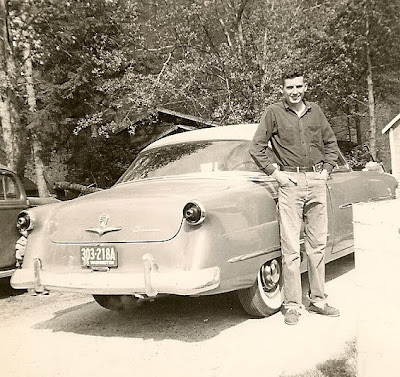 This is a photo of Andy. I was curious. Who was Andy..where does he fit? On the front of the photo written in ink is "Andy and his car" On the back, "Andy is a 6 footer, on our driveway, he'll be 21 Aug 17 so spose I'll be looseing him someday as he's got a gal." gal is underlined!
Through some research I did find out who he was, he is Loren Andrew Lemon Jr. and his Mother Florence (Graham) Lemon apparently wrote on the photo and mailed it to her sister in law Meady ( Far Guys Grandma). Probably with a letter, if she was that wordy on the back of the photo..just think what a treat old letters from her must have been. All of Flossies children, including Andy must have be born at home on the farm ( The farm that I grew up on. ) in all of the records that I have found it says born in Carsonville township. Well I am very familiar with the township, there is no hospital, no clinic..so it must have been a home birth.
Circles..sometimes I think these old photos are running me in circles. This photo was taken in 1955, perhaps in the spring. When I was zooming in on the photo to see if I could get a date off of the license plate ( I couldn't ) ..I noticed a small child peeking out on the left side of the car. I will probably never find out who the small child was. I have no idea if Andy is still alive, or where he may live, if I did I would return the photo to him..let's see he would be only 75 years old..:)
Posted by Far Side of Fifty at 11:07 AM

Labels: Old Photos, who are these people, Wistful Wednesday