One of our larger projects has been completed. The half log stair steps. They needed to be refinished. Ten years ago we sealed them with a product that was less than satisfactory for continual use. Besides that almost five years ago we got a little Border Collie Puppy that liked to chew on the edges of the steps, they were conveniently located next to his mouth when he laid down. I put a mixture of water and cayenne pepper on the edges of the steps, it looked a little funny..but it stopped his chewing.
The beginning of the project, bottom test step has been completed.
The steps had been used and abused by moving furniture in and out, and suitcases clunking up and down. It was time. We did a test step, the very bottom step..it was removed.. 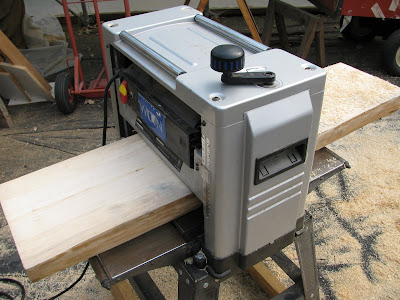 Planed on the planer. 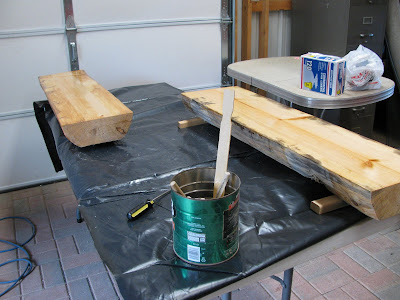 Sanded and refinished. The first product we used was a nightmare. It took three days for the first coat to dry. Lets see each step would get three coats, that is nine days, and we have twelve steps...three months?? That is not happening. We called the company that manufactured the product that was so hard you could skate on it..if it ever dried. It was seven years old..it had been on the shelf at the store that long. Luckily it was a store we frequent for supplies for home repair. They replaced it, with a store brand that they highly recommended. A very helpful hardware place. 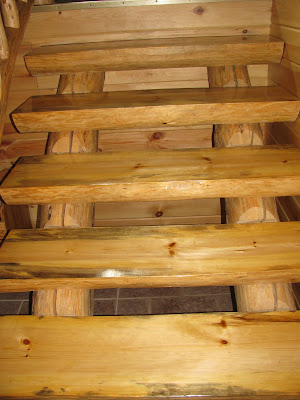 The project was able to commence, Far Guy started doing the steps two at a time and in a couple of weeks we were done! 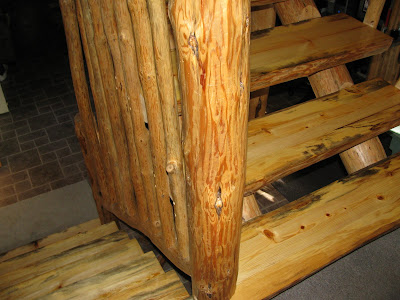 I got the front door repainted too, two projects scratched off the list..we are cruisin' ..but the Fall list isn't getting any shorter as I added a couple of things to it.. I had a corner in my garage that was dirt, it had never been covered in pavers, because it was just a storage area for plastic nursery pots. Well it looked pretty pathetic after "Johnny came way late to pick up the rest of the greenhouse junk he bought" So last week we found the correct color pavers far far away..luckily they were delivered to Park Rapids..this is a good lesson..if you start a project you shouldn't take ten years to complete it because your materials may have been discontinued, and possibly they will cost you twice as much as they would have, because they have to be delivered from far, far away and transportation costs for brick pavers is not exactly cheap. But the end result is the floor in my garage will all match, and I will be happy, WELL happier than I was with a dirt corner. :)
**We had our first frost this morning it was 31 degrees.
Posted by Far Side of Fifty at 11:41 AM