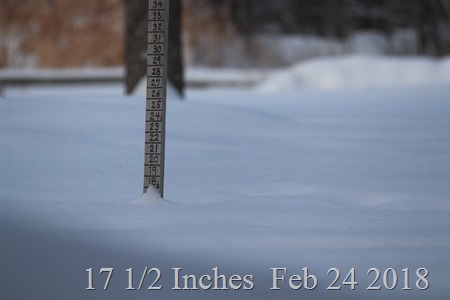 The snow is getting deeper…we shoveled…Chance nearly got stuck in the snow.  However it looks like we will be warming up a bit…if it rains the snow could be gone just like that.

We had a quiet snowy weekend.  Far Guy is woodcarving a little, I am working on various hobbies.  I seem to have a very short attention span lately so I work on one project and then go onto another.

Oh yes the winner will likely get a small woodcarving of some kind.  The Snowstick Contest 2018 will be open for guesses until Thursday March 1st at 9PM.  The winner will be declared when there is no snow or ice at the snowstick.