Bill ran the Tilt.  He was old when I met him, he only had one good eye.  He was called One Eyed Bill and sometimes Carburator Bill ( he drove really fast). Far Guy said “Sometimes he wore his glass eye and other times not so much.   Bill’s wife was named Vera. 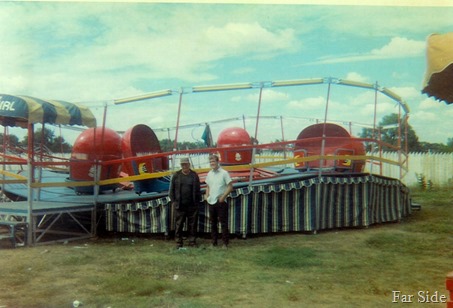 One eyed Bill and Far Guy visiting a different show.

Far Guy says: Coming back from that show Bill was driving an old station wagon, fell asleep and went into the other lane with a truck coming head on.  Paul was trying to open the door and I was trying to crawl out the window before we crashed.  Our screaming woke Bill up, and he got back into the proper lane just in time.  Paul said that since I was closer to Bill I should make sure he didn’t fall asleep again…I told Paul “I did his eye was open.”  Paul said “Thats his bad eye.”

Bill was First man on the Tilt.  You have to really love a Tilt to work on it, everything is heavy and greasy. The Tilt needs at least four guys to set it up and tear it down, and it takes two trucks to hold all the pieces for the ride.  The moving sections are called Intermediate Plates, the part the tub sat on is called a Bull Plate.  This was back in the day when there were no hoists or lifts it was all brute force that set it up and tore it down. The man on the clutch is what made this ride fun, a good clutch man could make those tubs spin and spin.  In the old days the motors were gasoline.  Most of the men that ran the tilt could ride the plates without getting hurt, they made it look easy…but it wasn’t.

Other men that worked the Tilt: Jerry Samuels, Bubba, Limey (that is a whole different story), old Bruce Lamont (called everyone a kook), Leo Stuker (Smelly feet and he got stung in the eye in Algona Iowa), Shortie Hall (Wife Wanda was a girl show girl and they had three of the cutest little girls, Shortie was a self proclaimed Minister), Stan Rupp (drank himself to death in 2001 in Belle Plain Iowa)…there may have been more but those are the ones I recall.

Tilt A Whirls were manufactured in Faribault  Minnesota by Sellner Manufacturing from 1926 until 2011.  I have heard that there is a tilt tub on Main Street in Faribault. 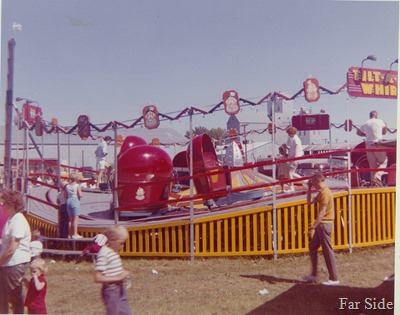 Merriams Midway Show Tilt A Whirl. Note the scenery on the light bar.

One day a box came in the mail.  Old friend Bruce sent us a package. 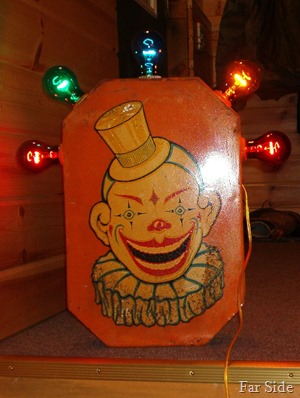 Far Guy cleaned it up and wired it to the power on his train set, that way we would know when the lights are on that the trains power is still on…handy with Grandkids!