Have you ever met a guy that was a chick magnet?  I did, however I couldn’t quite understand it,  he was engaged and married to many women.  He seemed to marry one after another, I wondered sometimes if he bothered to divorce any of them.

He was the Foreman on the Merry Go Round.  Sometimes called a Jinny/Jenny but we never called it that.  When Paul came out he was Arbuckles second man.   Arbuckle needed all the help he could get as he had a drinking problem.  I am not quite sure why the boss kept him around. 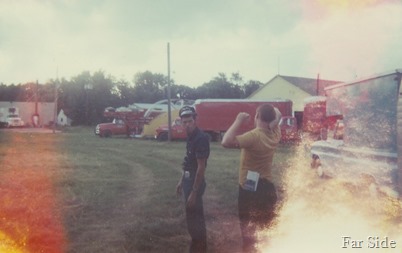 Bobby Arbuckle and Paul, Paul is stretching no doubt he just woke up, he has an ever present Billboard in his back pocket.
This photo was probably taken about 1967. 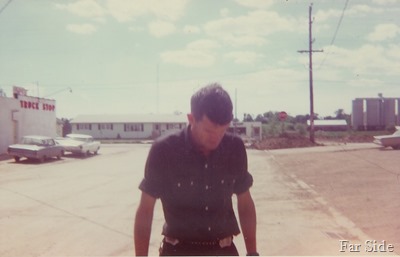 Bean pole skinny ladies man.
One of his “wives” in Southern Minnesota got mad at him and stabbed him.  The ambulance was called, she refused to get him from the hospital, so he hitchhiked to another of his former “wives” about 30 miles away.  She gave him a ride part way to meet up with the show, he didn’t have enough money for a motel room but he had enough to get drunk and knew he would get put in jail. ( This town had a real decent jail with good food.) Sure enough he got drunk and ended up in jail until the show made it into town and the boss bailed him out.

I met many of his “wives” and a few of his fiancees…he would bring them around to show off the ring he just bought for them…we used to say they were five and dime rings but it didn’t make a difference to the girls.  I just shook my head. The one “wife” I got to know seemed pretty normal to me…her name might have been Elaine..she was blonde and very pretty.

He used to let our oldest daughter ride the Merry Go Round all afternoon.  She and Bobby were good friends. 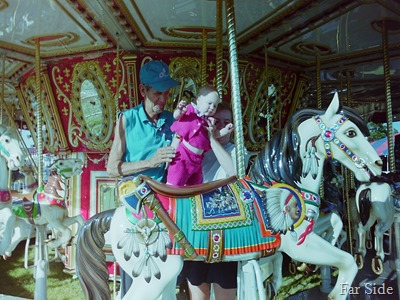 Here is Bobby helping get our granddaughter Savannah on a horse in Barnesville Minnesota in 1997.

In later years Bobby would be known as “Rodeo Bob” I am not sure how he got that name.  When he died they put one of the horses backwards on the Merry Go Round. We used to have a photo of it…but it was on Far Guy’s computer that crashed and was lost. 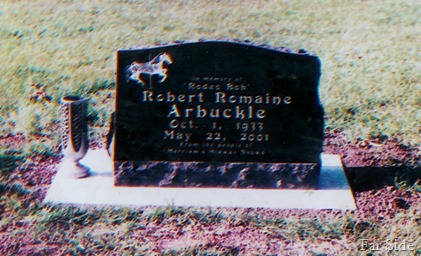 In Memory of Rodeo Bob
Robert Romaine Arbuckle
Oct 1 1933
May 22 2001
From the people of Merriam’s Midway Shows
Bobby died of some kind of cancer he was 67 years old.
If there was an obit, I wonder how many wives were listed?