It was a warm day yesterday, the humidity hung in the air all day long.  Sometimes the humidity was so heavy it misted and droplets formed on the windshield. 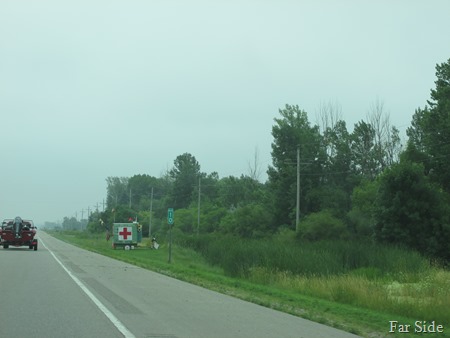 Far Guy had a Doctor’s appointment.  He will be a candidate for a lung transplant if he gets worse before he is 70 years old.  Under new Federal guidelines that is the cut off age. If you are over seventy you will just die.  You may die anyway as transplanted patients live only an average of five years after the transplant.

So far the Lung Function tests are still holding steady.  The port problem will be addressed in the next week or so.  The infusions he receives once a week are helping to hold his lung function steady at 21% of normal.  He has to see another specialist to find out  exactly how much damage has been done to his liver…you see Alpha 1 Antitrypsin Deficiency not only affects your lungs but your liver also.  IF he was a drinker…more than one drink a week he would be in real trouble…luckily he drinks alchol rarely.

The appointment was early in the morning we came home and had a nap.

Along the way home we saw this: 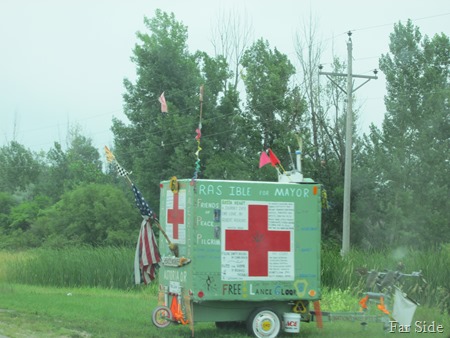 Lance Gloor received ten years in prison for drug trafficing through a medical marijuana dispensary in Washington State.  This is part of a movement to bring this Federal Law Suit to light…the State of Washington dropped all charges but the Feds picked it up. Apparently this “trailer” is being pulled by two individuals on their dream walk.

I wonder what is inside?  Samples?