We have a wall here in the house that holds photos and “Stuff” which stir up good memories.  As we unpacked we just hung up “stuff” willy nilly and kept adding to it.

I knew I would eventually want Graduation photos of all the Grands on that wall.  Savannah was already there.  I knew I would want them all in matching frames.  So I purchased five new frames. 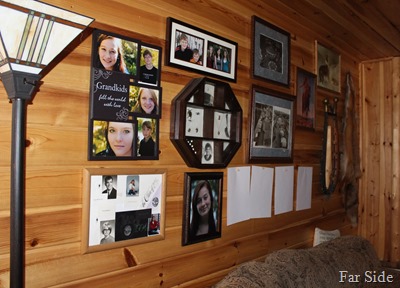 After I brought them home I took pieces of paper and thumb tacked them to the wall approximately where they would go.

Far Guy got out his tape measure, he measured everything…the walls…the frames…how far it was from the floor…he wrote everything down and did a bunch of figuring…and made a map.  Highly technical for me who just would have “eyeballed it and stuck a nail in the wall.”

He very patiently measured and measured again, I held the pencil and made marks for the nails. 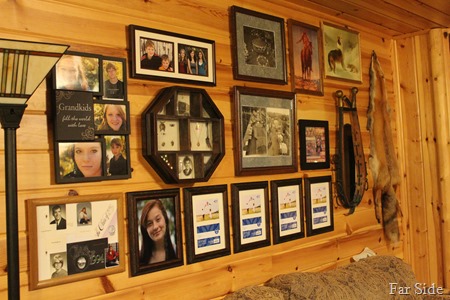 Those five frames are the only thing on that wall that match.  Lets just call it an eclectic collection.

In the next few weeks I will have 8 x 10’s of all the grands and when it is time for them to graduate their photo will become permanent.  While I was at it everything got cleaned in that corner of the house!

I like eclectic! And a memory wall is a good wall!

you sure have organizational skills!

I LOVE that wall! My groups of pictures in the hall were hung by me, guessing and hammering in a nail. I am so tired of straightening pictures every time I walk up that hall! I don't guess I could borrow Far Guy once that hall is painted, could I? :)

An excellent wall of fame :-D.

I always love a "memory wall". It has such a wonderful feeling when you look at it. Far Guy did an excellent job. (Bet it kept him busy for a while, hehe )

Very nice and eclectic or whatever, I could probably stand and stare at those pictures for hours! :-)

Of all our walls, the memory wall gets the most attention.

Great display. I find men to like to measure and figure. Sort of counters our desire to take a nail and pound it in. Love the wooden wall behind all the photos and "stuff."

That's one of those eclectic walls that catches people's attention.

My husband would be measuring too. Me, I'd just eyeball like you!

It is a great arrangement. Ours sit on shelves in willy nilly fashion. I am glad he measured because it is the only way to go.

I love your photo wall!

It's a nice arrangement of family memories. I'm sure it makes your heart happy every time you walk by!

Looks great! And it's nice to have someone who wnats to do all the measuring and calculating!

Very nice! I think your wall looks just great! Very interesting too with all the different type frames etc. Seems you both work well together! :o)

I'm more the "eyeball it and drive in a nail" person too. We used to have a 4X8 sheet of plywood covered in green carpet that was full of my kids' class photos, then grad pics etc.. Somewhere along the line it got taken down and the pictures put in albums that are rarely looked at. Better to have them on the wall.

Everything I have is eclectic! I need to borrow the Far Guy to map out a wall for me.

What a lovely wall of fame.

I'm with you: I would have eyeballed it and stuck in a nail. Well...maybe I would have tapped for a stud first, but only because I'd be tapping into textured paint on drywall, not gorgeous wood paneling :)

I had photos going up the living room stairs at the farm but here I haven't felt like I wanted to as I wasn't"staying" well here it is 13 years later! The minute I do I will move so maybe I should! I love your gallery.

I like your wall, and I like that you have 'lines' from the rows of wood to help keep everything straight!