We drove past the Enbridge Pipe Storage area the other day.  When they first started leveling for the pipe and building the racks we couldn’t quite figure it out. 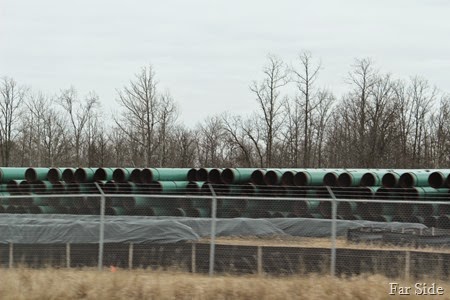 The Canadian Company Enbridge held some meetings trying to inform people about their project.  It will bring some much needed revenue to the area, and they pay their fair share of taxes too.  Oil  must get from point A to point B somehow…I have noticed that the protesters still drive vehicles to the meetings.  When the protesters start driving horses and buggies I will take them seriously. There have been horror stories circulating about right of way contracts.  Not sure I believe half of what they say. 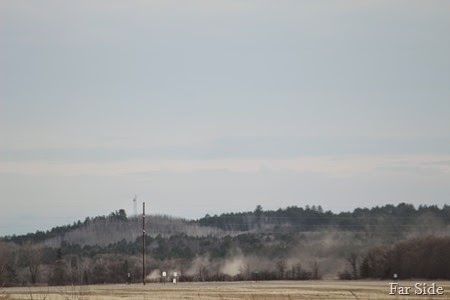 It is really dry here.  The farmers are in the fields and dry winds blow the top soil into the air.  So far they are just planting wheat as far as I can tell.

How about that Joshua Davis on the Voice?  I am so happy he made it into the top twelve.  I picked him as the winner a while back when he was on Team Blake…but then Blake blew it and Joshua Davis was a steal so Team Adam could win for a change!

I was half watching Hockey(Frozen Four) last night and half sleeping…North Dakota didn’t have their poop in a pile.  Far Guy gave up on them in the second period.  I did enjoy the Go Sioux sign!

Paige passed her Drivers Test!  She messaged me that the test was surprising easy and she was not nervous at all. She was looking forward to ditching her sister as her chauffeur.

Noah has been at Nationals for Vex Robotics in Council Bluffs Iowa…  I heard Little Elvis was missing his boy.  We watched some of the video of the matches and followed the scoreboard. I am certain that Noah is disappointed with their finish they won four and lost six matches. BUT it is all a good experience…being away from home…and being part of a team.

Adam and I went to the movie HOME last weekend…just he and I.  Basically it was all about friendships and doing the right thing, it was a bit silly…Adam reported to his Grandfather that I laughed a few times.   People who you might never seek out as friends can become your best friends.  Adam can put away a gallon of popcorn just like that…and he has braces…good thing it was soft buttery popcorn.  He scared the crap out of me on the way home…he made a funny little noise when he swallowed a cherry drop whole.  Luckily he didn’t obstruct his airway…although he said it hurt going down. I was relieved to deliver him safely to his parents.

You had a busy day. I was manning the sump pump all day as we had very heavy rain fall and winds. We were missed by a killer tornado thank God. Have a great weekend.

I feel the same about the loggers out in the woods, once I stop using wood I can complain. I hear you. We've had two of the most beautiful days ever so I am not complaining about much right now. :-)

I enjoyed hearing about your night at the movies with Adam. Can't they scare you to death! Glad Paige passed her test. It's fun to hear about your grandchildren.

I remember well the day I passed my driver's test and no longer had to ride with my brother all the time, although we still had to share a care some for school.

I will not be watching the NCAA championship game in protest of the ^%$%# call the refs made that put one of the SIOUX players in the box. Might even have a riot here in my yard over it.

That is neat you went together to the movie. The kids keep growing up so quickly and eventually he will want to take his girlfriend to the movies. The talk of popcorn makes me hungry. My wife wants to see the new Cinderella and I will take her without protest. We have another similar pipeline trying to be put through here and of course the nay sayers are getting all the coverage.

Sounds like a fun Grand date...good thing you didn't have to jump out and save him...those cherries hurt. It is dry near your place, has it warmed up yet?

Take a look at the spill in English Bay in Vancouver...this happened just over 24 hours ago...it's simply tragic. http://www.cbc.ca/news/canada/british-columbia/vancouver-oil-spill-source-composition-and-size-unconfirmed-says-coast-guard-1.3026227

This is my hometown...it makes me cry, toxic oil is terrible, and what it is doing to the wildlife is deplorable.. I am not sure which side I am on, but somehow they have got to make sure that it doesn't happen anywhere else.

I enjoy reading random glimpses of the lives of others. We live in different states and under different circumstances, but in the end we're much more alike than not!

Dry here also. Sure is scary this dry, isn't it?

What a fun, newsy post. I am thinking our country needs to use the pipelines for water. The east has more than their share.... the west is desperate.
I am a fan of Vex - I've been a judge for a few competitions. It is great fun to see kids involved in problem solving. I wish more kids could participate.

We have been getting a little rain here in MPLS and appreciate very bit but we need more.

I wish I could send some of our rain your way. It's nice today, but I think more rain is coming by Sunday. I missed The Voice the last 2 times, so I don't know what's happening. I do hope Blake doesn't win, he's had his share!

We had snow last night and again this morning. Not what you want to see in almost mid April! Hooray for Paige. I'm sure she is a very happy young lady.

Oil and Enbridge?You've got me going. In Alberta the corporate tax is very low and royalties are joke. Oil companies are also subsidized to the tune of $300.00 per meter. Are there pipeline breaks and spills? Are spills cleaned up? With pipe lines there are very few jobs after construction.

Lots of Friday thoughts. . .I don't know much about your pipeline, but Wyoming has its share - it goes with the territory, I guess.

Afternoon, funny there is no mention of flooding here, first in years... Enjoy your Friday thoughts Connie.Blessings Francine.

Catching up on your news again. Congratulations to Paige! It is certainly fun to pass that test. I think the robotics experiences are great for kids. Too bad about the bad call the ref made.

Hopefully some rain will get to you when you need it.
Sounds like a great time, except for the candy swallowing part.
Congratulations to Paige!
Hope you all have a blessed weekend.

I hereby nominate the above as quote of the year!

My nephew used to scare me to death and it was a great relief to take them home!!!
I love Joshua on The Voice. One of the few shows I enjoy!

Sounds like you had a good time at the movies with Adam ! Enbridge is our largest natural gas distribution company for all of Canada . Kids will be kids lol ! Congrats to Paige . Thanks for sharing , Have a good weekend !

I have no idea how to comment on this post, except to say - I had fun reading it!

When they arrive by horse and buggy...ROFL!! True! True! True! So funny!
Sounds busy your way. Nice busy. Enjoy the warmer weather. :):)