Someone was sixteen yesterday. 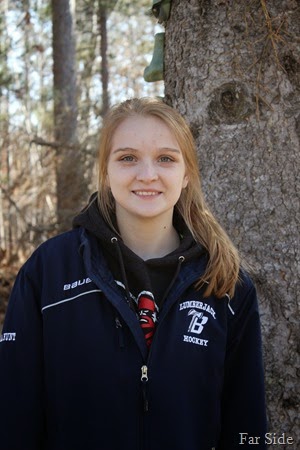 She is taking the behind the wheel test for her Drivers License today.  I remember when she drove the toy fire engine down the stairs and broke her leg. I hope she doesn’t break anything today.

I also remember the big deal they all had about her name.  She wasn’t named for days after her birth….she was just “The New Baby” …Savannah who was 33 months old wanted to name her Alice (after Alice in Wonderland), Maddie was not yet a year old so she didn’t care, Far Guy saw a Robin that day so he suggested Robin. Her parents went back and forth…forth and back…finally they agreed on a name.

They named her Paige. 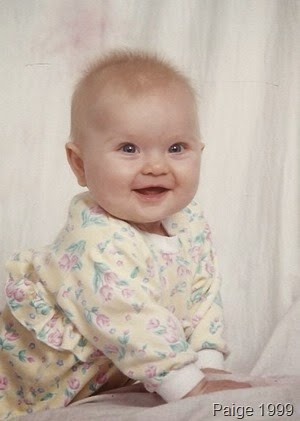 From a few months old to sixteen just like that!   Happy Birthday Miss Paige!

Happy Birthday to your beautiful granddaughter.

What a beauty! I remember being sixteen and getting my driver's license. It was an amazing time, so long ago now. Happy birthday to the sweet sixteen Paige! :-)

If she decides to drive down some stairs - I hope she does so in a tank like the one in yesterday's post and remains beautiful and unscratched!

Enjoy the freedom of the road Paige - and be safe.

They grow up so quickly.

My what a sweet baby she is and now pretty young women.Birthday wishes to Paige. Blessings Francine.

Oh that baby picture! I bet she was a joy to hold. I like the name Paige. She is very pretty. Happy Birthday Paige!

It is so much fun to see baby pictures, and then to try to see that baby in the adult (almost adult)!
Happy Birthday to a beautiful young lady!

Beautiful baby and beautiful 16 year old. You and Far Guy have a good looking family.

From a cutie to a beauty. Happy Birthday!

Happy Birthday to being sweet 16, Paige.
Good luck on the test.

Sweet sixteen and never been kissed? That was my grandmother's phrase.

Happy birthday Paige! I'm sure many people have challenges to name their children. I named my son very quickly (actually , I named him Brian not very quickly)Now this is getting complicated(Brian Very quickly)( I better stop now)before my Dad would have been able to have input.Now that's a wild sentence!

Your grandkids have grown up fast these past 5 or 6 years that I have been following. Graduation is around the corner for her in a couple of years.

Paige's hair in the baby picture is just adorable! My daughter's hair did the same thing about that age. Happy 16th and I hope her favorite birthday present is her driver's license!

Wishing Paige a beautiful--and safe and successful!--birthday. For her driving test, I suppose the old theater wish, "Break a leg," would not fit in well in this scenario.....

What wonderful pictures! They sure grow up fast. Hope the driving test goes well, and no broken bones!

You have a beautiful granddaughter. Happy sweet 16!

Driving is a momentous rite of passage, and not only for Paige, but for her parents too. Happy sweet 16.

OMGosh! They grown up so fast! Happy birthday to Paige and I hope she passes her driver's test. :)

What a pretty girl! I'm assuming, your granddaughter?