We think that this car was a 1940 Willys Deluxe Coupe.1939 Ford Deluxe  The photo was either taken in North Dakota (my guess) or California (Far Guy’s guess) As for what year the photo was taken…sometime between 1944 and 1946. 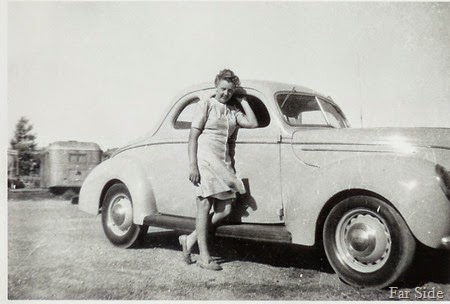 Uncle Jimmy married Auntie Esther in 1943, they were Far Guys Uncle and Aunt.
I love the legs, when I first saw this old photo I thought “Way to go Auntie Esther!”  What a beauty she was!

What a surprise to see that picture!  It was taken in 44 at Camp Roberts Calf, Dad hitchhiked to San Francisco to buy it.  It is a 39 Ford, they drove it back to Mn after the war
Thanks for the memories
Bonnie

She would have fit in with ZZ Top's song, "Legs"!

My dad says this is a 1939 Ford Deluxe, the Willey's didn't have the small window behind the door post. He claims the second "line of chrome trim" on the hood is a "give away". He says he has no idea where this is, ND or CA. :)

She reminds me a lot of my mother at that time period. Great picture.

Cool picture of Esther. I still miss and think of Esther & Jim often.

That is a very neat picture, and I just love that old car. Great that Intense Guy's dad knew it exactly. :-)

Wow, she even had her skirt above her knees! She was very pretty.

I had looked at photos of the 39 Ford. The way the headlights set into the fender is why I guessed a Willys

Well, I have no idea about ancient cars, but I wondered about the color. White? Tan? Gray? I love that pose! She could have been a model!

I am really poor at identifying older cars. I have a few archived photos of my parents that are neat and I should dig them all out and place them in one folder. I too had a great aunt Esther married to Uncle Lee. They were from the Winterset area of the Bridges of Madison County. Their dairy farm a generation later now produces thousands of hogs for the meat companies.

I have no idea what kind of car this is but I do think it's a very wistful moment with your Auntie posing with the car. I do like old cars.

Wonderful post and photo ! I love the older vehicles or as they are called now a days Vintage lol ! Thanks for sharing , Have a good day !

Great picture, my mom took many shots like that. Blessings Francine.

Definitely the California influence there. On to Hollywood....:)

Obviously a proud moment for the new car owners. I think my parents have a proud photo of each new (sometimes just new to them) car that they bought. A car was special then.

Ah! I see FarGuy was correct. California. She looks young and in love!! :)

She was a beauty. Very glamorous looking! I also enjoyed your Easter dinner post and seeing your family.

How fun and do you ever look back through the old photos and notice how many of them are taken with cars or cars in the background! So easy to forget that back then a car was a BIG deal!