I saw this really cute Origami Basket.  Goodnightgram shared the link on her blog. I have never tried Origami before.  It looked interesting and fairly simple.  WRONG.

Let me tell you those folds have to be exact.  It is just like sewing…eyeballing something or in the ballpark just doesn’t cut it.

I attempted a basket several times.  The results were PATHETIC.  I put it on my someday list.  Finally I conquered it.    I played the YouTube Video and kept pausing it until I completed one basket.  It is not perfect but almost…as paper baskets go. It is made from 2 1/2 sheets of 6 X 6 inch Origami paper( Two sheets for the basket and 1/2 sheet for the handle.)

It is not large enough to put much candy in…that is why I used the origami paper on the Dixie cups. 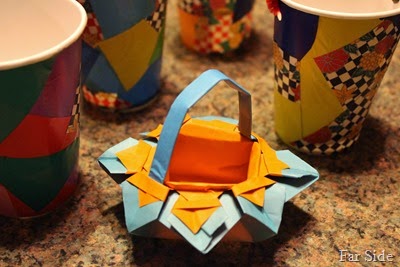 Far Guy asked if it was for him…I said sure.

One more someday project…hey I think I want to try that thing crossed off my list.

Labels: I am a little crafty, May Baskets, Someday projects

Origami is really hard! When I was a child we had origami shows on TV (yes really) and the local newsagent sold special origami paper. I learned to make a few things but was never good enough to follow the origami guy on TV - he folded too fast. And I never felt the need to carry on after the craze was over.

Very impressive, but can you imagine cranking out a bunch? Better it should go to you special guy.

You were thinking of making May baskets with them, weren't you? Now you'll find something else, I suspect. :-)

Very unusual and very pretty basket for May Day.

Origami is not my forte either. My folds are never exact.

That had to go to someone special! Have a great day.

I do some origami things but they are complicated. I have Asian kids in Sunday school who whip off things frequently. The Midnight Carver has a blog in which he shares many folded items. He is a Michigan transplant the lives in the Iowa City area. It does look like a basket. I only really do the stork and never remember any of the boxes that are done.

It does look like a lot of folds, but it turned out cute. I'm not sure the May basket recipients would appreciate all the work that goes into it. Might as well give it to Far Guy!

That just goes to show that you're never too old to learn something precise. Looks great to me. I'd be like Far Guy and be glad to have it.

Origami is tough! My son tried it when he was in middle school. Kudos to you for persevering and completing the basket. It's really cute!

That's one of those challenges I'd leave to the professionals.

Then again, I'd leave sewing and knitting and crocheting to the professionals as well--so now you know where I stand on all that being crafty stuff ;)

What a cute basket!

It looks a bit complicated for me to try...it's cute, tho!

Your basket at least looks like a basket . Origami is challenging for me, yet I remember whenever we had Japanese exchange students staying at our place they could fold all kinds of intricate things in minutes. Sheesh, origami IS child's play in Japan but befuddles me. So yes, I think you did a mighty fine job !

Yes, it is very exacting. I think you did good to finish one and cross it off your list--LOL! :)