As far as I can see the “Golden Years” are not much fun at all.

You never know from one day to the next what body part will fail.

Far Guy is ill again.  He nearly croaked Thursday morning, he was in severe respiratory distress.  Luckily I wasn’t sleeping like a dead person and heard him call for help.  After using his rescue inhaler I asked if he wanted to go to the ER right then or wait until his Doctors appointment in the afternoon?  Of course he chose the afternoon appointment…where he got a going over and a chest X-ray…and almost a hospital stay.  They let him come home with me but he goes back in early Friday (today) and may be admitted then. The Dr is only giving him 18 hours to get better before hospitalization. His oxygen saturation levels are way down even on oxygen, he got a prescription for an antibiotic and a steroid.  He needs to see the Pulmonary Specialist again, the last one retired.

It is really hard to stay out of all the things that make his breathing worse; perfumes, after shave, essential oils, candles, cleaning solvents, smoke from grass fires and dust along with Pine Pollen which hasn’t started yet in our area. The medications that he takes for his Trigeminal Neuralgia even has shortness of breath as a side effect.

We try to stay close to home and avoid crowds and gatherings.  One day last week he went to a program with his Uncle and said “Every woman there wore a different perfume…it was perfume hell.”  That day was the day Far Guy began to go downhill.  His walks took longer he needed to take more time to rest, he started coughing again, everything became a struggle.   He kept thinking that everyday would be better…but that didn’t happen.

Hopefully the medications will help this time. 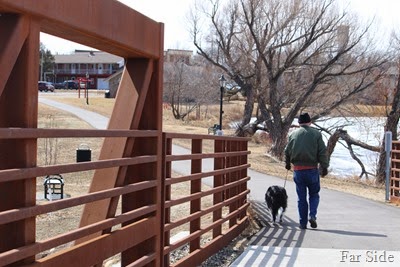 Update: He saw the Doctor and is doing the tiniest bit better this morning.  The Doctor is hopeful that he will keep improving.  Far Guy sees the Pulmonary Specialist next week.

Thank you for all your good thoughts and prayers!

I am so sorry and I'll be praying. Please update us when you know more.

Life In The Seniors Lane said...

I will be praying also. I have asthma that reacts to the same things. I too am struggling this year. We need a darn good rain to wash everything down.

Praying for both of you.

I am so sorry to hear that Far Guy is feeling so bad. I will pray for him and for you. Please keep us updated.

Praying. Lung problems are scary. Both Tom and I have problems when perfume is in the air.

Praying for Far Guy, hoping he will start feeling better so no hospital. Take care both of you.

Oh no!! Poor Far Guy! He never seems to catch a break does he?

I hope he recovers and enjoys some golden years!

I am alarmed to hear that Far Guy is sick again. I didn't know that he had a chronic breathing problem. This sounds like asthma? I wish he had gone to the ER right away instead of waiting to see the doctor in the afternoon but then he is an adult and that is his choice. Prayers from here too and please keep us posted.

Gosh, now I'm worried too. Far Guy is WAY too important a person in my life to be that sick. I've got my fingers crossed that the medication will help, and I'm sure glad you woke up in time. :-(

Oh I'm so sorry to hear about your husband. Sending healing wishes you way!

So sorry Far Guy is struggling with his breathing and meds. We have friends who as a couple are allergic to so many things, including perfumes. I haven't worn perfume for a long time, as I now realize how many people are effected by the ingredients in these. Hope you have a good weekend of rest and recuperation.

Oh, no. I hope the meds work. Mr. Dreamy has breathing issues, not as bad as Far Guy, but it gives me an inkling of what he (and you) are going through. Good wishes - good breathing!

So sorry to hear that Far Guy is so ill. I hope his appointment goes well today and that the meds work, and quickly! Way too beautiful a time of year to be stuck in bed sick. Sending love and good wishes.

Sending prayers that his health will improve.

I am so sorry that this is flaring up again. This allergy stuff gets really serious so quickly. I hope that the hospital or whatever will start to turn this all around. Our neighbor has an inhalant device with medication in it like a therapy session that she pulls out every once in a while during this season.

Hi Shirley, Yes he has suffered with Chronic Breathing Problems since last May. His lungs are functioning at 27 %.

Great to hear the update.

This is not good news. It's tough when a strong guy like Far Guy gets something that severely limits him. I hope he continues to recover.

Oh, my goodness! I'm glad you were able to hear and be there to help. I am including you both in my prayers!

Don't like to read that this happening ~ sending prayers and many many get well wishes!

Hope he does better every day! Perfume is awful!

I did not know that Far Guy has breathing problems in addition to the awful Trigeminal Neuralgia. Thanks for telling us. You both are so important to all of us readers of your daily Blog. To me you are like family along with Chance.

Thanks for this morning's update. Please keep us posted. We all are praying for you both.

Sendin' prayers your way sweetie. God bless you both!!!

I am continuing to pray for your Far Guy.....hope he continues to improve! Praying for you too, to keep taking good care of him and you!

Glad to read the update at the end of this post. Prayers that FarGuy's breathing continues to improve and that the new pulmonologist can help him find the perfect medication.

So sorry that FarGuy is having so much trouble ! I know all about Lungs, Allergies, Asthma, and how serious things can get so fast. Hope he will recover soon. Sharon A

I am so sorry Far Guy is sick. I hope you both get the answers you need. The Trigeminal pain must bet very unpleasant. I don't have that, but I have residual pain from Bell's Palsey. The breathing distress is scary! Best wishes to you both?

So so very scary to have respiratory distress. Our son-in-law's maternal grandmother was hospitalized this week with COPD complications - - - really bad shape when she went in but they got her turned around and better than she has been in weeks. Pine pollen was one of the culprits. We had the yellow dust about everywhere for at least three days - - - but then the rain started and it has rained everyday -- - - no yellow dust!! Praying FG continues to improve.

Oh I am so sorry about Far Guy I do hope the medication works for him. Hug B

His condition has to be a constant worry for both of you. I am so sorry your golden years aren't so golden.

Well, glad to hear he is the tiniest bit better, but we'll still be praying for him. Not being able to breathe is so scary!

Scary news, healing thoughts to Far Guy! Would it help if he wore a mask? Just thinking....less crap inhaled...less reactions.
Don't want to get all preachy....but you may want to look into foods that cause inflammation.

Far Guy will be in my thoughts. I'm glad to hear he is a tiny bit better, but hoping he gets a lot better soon. Take care of yourself also.

Prayers that he will continue to improve!!
How scary for both of you. Sounds like staying home is the best thing right now.
*love and hugs*

Oh, that must be awful not to be able to breathe properly. Have they checked him for allergies? Remember my little grandson that kept ending up in the ER? He had been to an allergist and they said dust, animal hair ....the usual until one day my daughter went to get him at my ex's and he had been fine but my ex gave him a P&B sandwich which he only took one bite of and within an hour he could hardly breathe. My daughter took him to another allergist, insisted on tests for peanuts and lo and behold.....he is extremely allergic to peanuts, wheat and soy. He's been fine ever since they figured it out pretty much themselves! Peanuts is like the #1 allergy....how could an allergy doctor miss that one? I will pray for Far Guy and you too as it is not easy being the caretaker. Bless you both!