I have a very old photo of Grandma Tracie’s sisters.  I am not sure what year it was taken…maybe the 1940’s. 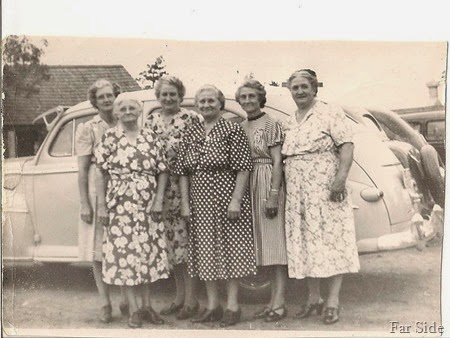 Laura died in 1949 so the photo was taken before that.

The only sisters I really knew were Aunt Emma and Aunt Frances.  I may have met Aunt Annie once.  Poor Aunt Frances until now I didn’t realize after Gram died in 1983 it was another ten years that Aunt Frances was the soul survivor of this part of the family.

The brothers all died earlier.

Gram always talked about her sisters.  I was surprised to learn that she had four brothers.

April 29, 1983  32 years ago was her funeral.  It was a packed church and the cars stretched for miles in the procession from the church in Park Rapids to the cemetery in Osage.   The congregation sang What a Friend We Have In Jesus that day…I always think of her when ever I hear that hymn.  We must have had coffee at the church…I don’t remember, I don’t recall what the weather was like that day either. 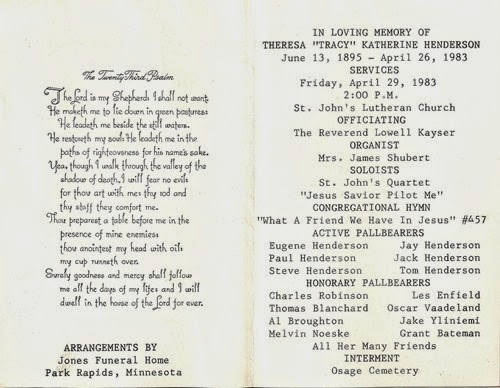 You may notice that her name is spelled “Tracy” in the obituary.   I think some people may have spelled it that way but I always go by how she signed her cards and letters and that was “Tracie”.

Gram was 87 years old when she died, she was living in her own apartment in Park Rapids.  She had not been feeling well…she had a biopsy of her liver and they found out she had cancer.  They must have disturbed the cancer because about a week later she died.  One of her worst fears was going to the Nursing Home…she escaped because she died in the hospital.  We saw her on Sunday afternoon in the hospital and she died early in the morning on Tuesday.  She wasn’t afraid of death just the Nursing Home.