It took me most of the month but finally, the morning I woke up and said “Our old Robins have croaked so they won’t be back to use the nest platform this year.”

Guess what??   They showed up.  One was searching for worms guarding the area of the nest and the other was in a tree watching. Robins do not maintain their pair bonds over the winter, raising the young must wear them out.  However if the same pair meets up at the same place in the spring they will usually pair up again.  Robins usually only live about two years but many banded birds have lived as long as six to fourteen years. 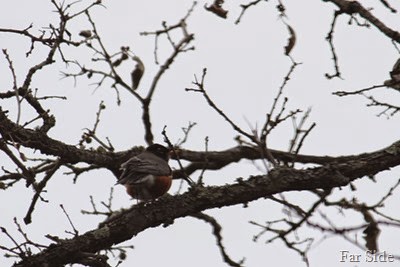 I have to search for my phenology list.  I have it someplace…I think.  I am sure “She who sees Robins first” saw hers a month ago. I am dead last this year. 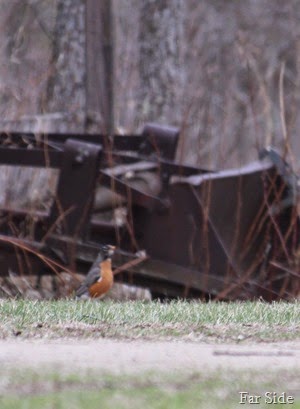 I tell ya it pays to have a blog when you have lost your phenology list.  I probably put it away so well it is lost forever.  It also includes First Loons, First Ticks and First Bluebirds.

We have another first to report.

Our first Mourning Dove in our yard.  Usually we see them out on the road, but this is the first time they have visited our yard. 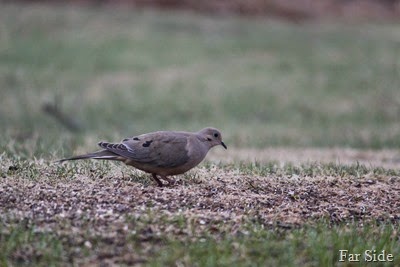 Not sure why they are suddenly in our yard.  I wonder if he/she will stay?

I am excited to see the Robins return it feels like it is really Spring now!

“From the beginnings of history, people have searched for order and meaning in these events [phenological events], but only a few have discovered that keeping records enhances the pleasure of the search, and also the chance of finding order and meaning. These few are called phenologists.” – Aldo Leopold (1947)

Labels: birds, first Robins in our yard, Robins, She was first again, Spring in Minnesota