Recently one of my husbands classmates shared this old photo.  It was the third grade class in 1958-1959 at the Osage School.  Mrs. Stearns was the teacher.  She was also my third grade teacher.  ( I was in second grade when this photo was taken.) 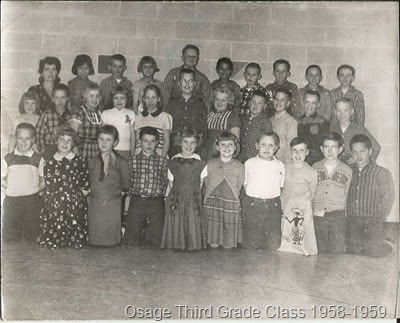 We have identified all but two or three of the students.  I dated Bobby ( loud plaid shirt) in the back row, he died in 1972 from injuries sustained in a snowmobile accident. Ken died in 2005 he is next to Bobby.   Rhonda is in the front row, third from the left with the scarf, she died in 2009 from MRSA and complications from MS, gosh I miss her.  Johnnie fourth from the right in the front row died in 2005 from sleep apnea.  In the middle row is Diane (white blouse) who died of cancer in 1995.

Several of us…including Bill in the back row second from the right commented on Gary the ladies man (plaid shirt front row) being between Rhonda and Gloria.   Far Guys cousin Alaska Guy is on the left end of the front row.

A few days after seeing this photo Gary with the plaid shirt in the front row died.  He was awaiting a lung transplant.  He had some kind of hereditary lung disease.   We  visited with Barb (Gary’s wife) just two days before his death, she was getting her ducks in a row to head to Mayo, she said Gary was sick and had been up all night coughing…the next day she took him into the ER.

Back in 1967 you could not be married and be in High School.  You could be pregnant and a tutor was assigned to you but if you were married and not pregnant you were not allowed to attend.  ( Perhaps being married and having sex would rub off on other students…)

I remember when it was announced that the school officials found out about the marriage and kicked them out of school. (I believe we were in Biology class when they came and got Barb and she came back crying saying she was kicked out of school.)   None of us thought it was fair.  After that there were a few more marriages…but secret ones…announced right after the graduation ceremony…the school officials couldn’t do a thing about it then.

Students should have the right to learn and attend a high school …married or not.  I think it was a form of discrimination which is probably no longer acceptable.