Chance and I went down to the public access to see how the ice was coming along after the warm spell.  Sadly the warm spell is now officially over.

There was no sun, it was a dreary day.  BUT the ice was talking.

I heard it as soon as I got out of the vehicle.  No one was around so Chance was off lead. 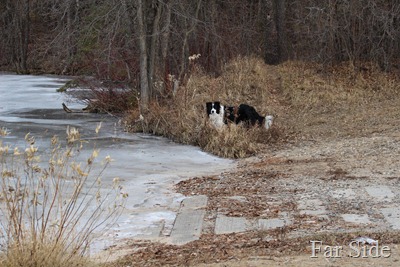 Chance looked bewildered, his favorite dock was gone and his water was different.  There were noises that made him uneasy.  There was no way he was going to venture out onto the ice by himself. It was making noises..scary noises.

Ice as it expands and contracts makes a groaning moaning sound that moves up and down under the ice.  It is almost as if the ice is talking..hurry..freeze..freeze faster..capture all the water underneath us before it warms up again. Sometimes it seems like the ice and the water are locked in some kind of a battle.  The water should just give up..the ice will win anyway. 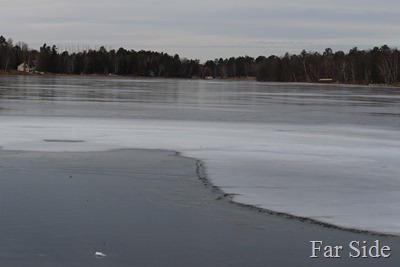 Minnesota Ice Music..I remember cold nights at the resort when Far Guy would come home from work and say he heard the ice as soon as he got out of the car after his 90 mile trip home at the end of a long day.

When I take Chance out late at night..I can hear the same icy Minnesota symphony.  When the ice gets thicker the sounds will echo up and down the lake.  No, we don’t live on the lake..but we can hear it’s music from our yard:)

We had one day that it was almost 60 degrees, now this morning woke up to it being 18 outside! High in the low 30's. But then up into the 40's after today and then of course here comes the rain and snow mix. Poor chance, scary noises aren't any fun!

Oh, I love the music of the ice!

Lots of snow and ice and cold here - finally! Yippppeeee!

Reminds me of the story when our kids were 4 or 5. The first time they heard our Wisconsin Symphony they were scared to death.

I imagine that makes some beautiful music.

One year we had some amazing ice about ten inches thick...that's way too much for us. A call came to the emergency center claiming some one was shooting at them. Hubby went to check and the ice was cracking from one fence post to the next. The cracks would open almost in an explosion with a loud bang/pop not unlike a gun. This was all something new for us.

I love that picture of Chance in your header. I have never heard this music, but I can imagine it after reading your description. :-)

I usually don't hear the Ice Music as I don't live near any water. But I have heard it on a windy day when I was down at the Lake Michigan shore.

I have not heard this either, but imagine it could be a little scary.

The sounds of creaking ice are really cool - as long as you aren't out ice fishing on it! LOL

Smart Chance, not going on the ice!

How beautiful you make Minnasota Ice sound.......glad Chance didn't take one going out on the ice......Blessings Francine.

I don't know that I've heard the sounds of ice. We used to live on a pond, and later a smalls stream that used to freeze over, but I don't remember hearing any sounds. Is it something that could be capture in a video?

Not something I have heard, but I'd like to:) We have a chance of snow in the forecast for Sunday!

Chance is one smart dog to stay off the ice when it's noisy.

My youngest son took a college friend from Arizona out ice fishing for the first time. And his friend about jumped out of his skin when the ice began "talking" ... actually more like "booming", he said...:)

How fascinating. I have never heard of ice talking.........it must be wonderful even if it is scary.

Thanks for this great post and please hug Chance for me.

I would love to hear it ! Kind of like wood boards expanding and popping you can hear that to in these old farmhouses . Give Chance a cuddle from Miggs and I ! Have a good day !

Pretty cool. Take a video with sound and let us here, please. It is something I know I would enjoy. I love going out into the corn fields and hearing the corn grow, the ice would be something really neat!

Now, I've lived all my school years down the street from the pond we ice skated on, but I never ever heard anything like this. Fascinating! I guess our pond was too dinky to know how to sing. Or maybe it didn't know the words...

We probably have about 12 inches of ice now. Yes, I know what you're talking about with ice noises. The same thing happens on winter ice roads. the weight of the trucks on the ice makes the water squish ahead. Don't drive too fast as you would be going up hill.

I suppose..but I have never taken a video with my camera. LOL:)

From an urban person, you make that sound downright peaceful. It sure beats the whitish noise of the freeway that is a mile east of me.

I had no idea that ice made noises!

Oh my gosh Connie, that last little bit is so beautifully written, I swear I can hear the ice groaning....

It reminds me of snowy nights, and northern lights, spent at my Grandmothers home.

I need to experience this....
you need to send invitations :)

How wonderful...nature is so awesome!