These in-between days are difficult.  The ones in-between Christmas and New Years. They have become long nap days, and no lets stay home it is too cold to venture out and lets just read books days.

We watch the birds out the window.  The Turkeys visit at least once a day. The male usually brings all his hens with him..usually 6 or 7 are in his harem.  There is a hierarchy too..some stand their ground and some allow themselves to be bossed around. Chance watches them patiently through the window from the landing. Today the squirrels were testing out the Turkeys by seeing how close they could run by them. 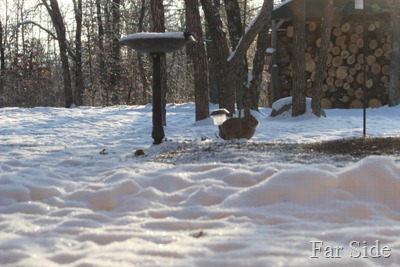 One lone rabbit visited …although knowing rabbits where there is one there are usually more. ( I know this because I raised rabbits once upon a time..not on purpose..but accidently..twice.)

I should make a list of things I need to accomplish..but I am afraid it will be so long that it will be depressing..so I am holding off.

We don’t even cook..we warmed soup for supper..canned for Far Guy and homemade vegetable in the freezer for me.

The temperatures are cold..below zero.

I read a book which was called a provocative romance..not quite my cup of tea..everyone has been talking about it..and I understand it is a Trilogy…I will just leave the rest of that series to my imagination…much Laters Baby.

I am going back to my novel The Spruce Gum Box about logging and pioneers in the late 1880’s…much more my style.

We got a new coffee maker for Christmas..one of those fancy smancy ones that uses those little cups.  I had a cup of coffee and my inner ear started to flutter so bad that I got dizzy…no more coffee for me for awhile. ( I usually do not drink coffee.)  Honest it was like a really large insect was trapped in my ear flapping it’s wings. Far Guy put a bunch of peroxide in my ear and the fluttering went away…what is up with that?  I have had fluttering before..but it has always resolved with a wad of ear wax rolling out of my ear.

I had to go into the eye Doctor again.  He has always said that my eyes look suspicious for Glaucoma..something about a ropey looking Optic Nerve.  He wanted me to do special testing in November, so I did and the results were inconclusive..so I had them done again..and the technician said that everything looks just fine but to wait for a letter from the Doctor.

I broke my toe before Christmas..I stubbed my toe hard enough to make tears come to my eyes..since then my toe is really, really sore.  It is all swollen and fatter than normal..and sore..I don’t want to wear shoes at all.

Well enough belly aching for now..at least we have escaped the puking, pooping stomach flu that is going around:)

Sorry to hear about your toe...I hope the tech was right and that your eyes are just fine. We are colder than usual and it is dark/dreary...not my fav time of the year. We nap a lot, too!

That cold weather, a sore toe, a mediocre book to read... I guess those are the reasons for your feeling in between. Wishing you a better day today, Connie. :-)

Sorry to hear about your toe that hurts I tell ya did mine years ago it has never been the same since . Your book you have gone back to reading sounds like a good one . I like books of farming and history . It is cold here to and the sun is trying to peek out but even if it doesn't it is still bright as the light reflects off of the snow and isn't so gloomy ! Lovely photo looks like it does here snow and critters lol ! Have a great day !

Sounds like you've got the winter blues. I was reading the posts below, I'm on of the reads-and-comments-occasionally followers. You have a lot of blogs- that's a lot of writing! I have 3, each one specific to part of my life.
Hope your toe heals up quickly- kind of tough to get out and do anything when you can't put your boots on.

Sorry about your toe. I fractured the toes on my right foot a few years ago and I remember the agony of it. You should go to a podiatrist and have your toe X-rayed. They will give you a lovely clumsy boot to hop around in for a few weeks. It really does help though.

I hope today is a better one for you!

Oh my goodness, a broken toe isn't fun, had a few too many of them.. Ouch.

It's definitely the inbetween season, but I am dreaming fine garden dreams...looking at photos on the computer of bright cheerful flowers, and then I look out the window, and reality comes rushing in. What, why is it white out there? LOL.

It's nice and bright, and warm in my archives....take a look at yours, I am sure it's beautiful there also.

Sounds like the Winter Blues to me. Sorry about your toe and sure hope your eye is okay. Winter has just started and already I am sick of it. Must have something to do with getting old. When the old bones start to hurt because of the cold and shoveling "lays me up" for hours; I tell myself I should move south. Guess I'll just look at beautiful pictures until things warm up. Stay warm. Hope your spirits rise soon.

Knock on wood, I've escaped the flu that is going around here, too.

Your label of the days is perfect - almost like I want to hang on to the old year because it is comfortable. I've been grabbing my knitting needles more this week and staying inside out of the cold which arrived with the Christmas Eve snow.

Who needs T.V. when all the critters are right out the window, neat........The days do drag on, but I love to read books, read blogs, eat, eat some more, love my coffee, no ear fluttering here, to funny, love reading your posts.......Hope your toe feels better, ouch, nothing like bashing ones toes, Blessings Francine.

You are the most entertaining belly acher ever. Sorry 'bout the toe. But I'm so very glad to hear that you have missed the stomach flu. A bunny huh. I see quite a few of them in our driveway, I know that they are around even if I don't see them because my Brussels Sprouts are getting gnawed on.

I don't read much fiction these days, I used to read a lot. So I'm really not up on the latest fiction but I think I have heard that there is some steamy book - trilogy, out there.

I might check out that steamy book trilogy one day. Probably won't go looking for it though. My favourite way to pick out books at the library is to just browse through through the books that are sitting on the cart for reshelving. That way there is less to chose from, and the job is easier and quicker. Picked out seven books that way the other day, I'm on the third one now, and so far they have been good. Probably won't see that steamy one there for a while, there's probably requests for it a mile long.
I'm enjoying that Christmas is over, no pressure to get this or that done. The days seem so short though, but already the daylight seems to last a bit longer:)

I have to get tested every six months for possible glaucoma and/or macular degeneration. My eyes are not as strong as they once were, and the doctor has me taking vitamins formulated for eye health. Keeping my fingers crossed. Ouch, with a broken toe it's no wonder you can't be running all about. Relax, keep an eye out for nature's visitors, and try to enjoy your forced inactivity!

With all the visitors in your yard it must be a very interesting day.
Watch the glaucoma. You know better than I that it can do lots of harm to your vision.
It sounds like you had a really good buzz from your coffee!!

Oh my, poor toes! I wouldn't want the flu either!

Wish your in-between days were more to your liking! Hope your poor toe heals up soon and doesn't cause you too much more grief. In the meantime, yeah! Stay away from that flu everyone else is passing around. The giving season is not over, yet...

I hope your eyes are fine. My dad and my son, Dagan, both have glaucoma, but in our family it's normally cataracts.

I hope you enjoyed those lazy days and had a wonderful New Years. :)

If your coffeemaker uses K-cups, you can buy the "My K-cup" insert so you can use your own coffee and not a K-cup.

Hi Jeannelle, Yes we have one of those inserts:)