Who knows the Cornet/Trumpet player?  That one that plays Taps for Soldiers at Funerals?

I asked the brass player one day.  Why do you play?

"It was a good gig for a young man.  You show up and play and you get enough money to take a gal to the movies."

He played in the rain for a special gals Father when he died... 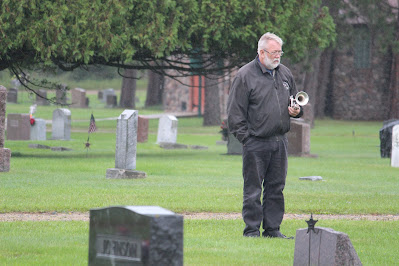 The notes fell loud and true when he played Taps for his Father... 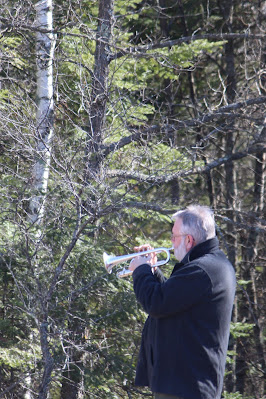 It was a Good Gig as he played Taps at hundreds of Cemeteries over the years.   If he wasn't presiding over a service at the cemetery he was playing Taps.  Bob was a Minister.

Monday night the Cornet/Trumpet was silenced, perhaps the Angels took over...can you imagine a host of Angels playing for you?   Seems fitting for someone like Bob.

Bob died at home on April 25 late in the evening.  He leaves behind his loving wife of 50 plus years and six children...one of whom is our son in law Andy. Bob had Myelofibrosis which progressed to Leukemia.

We are sad for our son in law Andy, our daughter Jen, our Grandsons and all who loved Bob.

My deepest sympathy to Andy and the family. I am sure the Angels are enjoying his playing.

What a wonderful life of service to others. So sad for Andy & all the others who loved his dad.

:( I am so sorry that his trumpet has been silenced...

I hope he gets a good version of Taps at his send off.

Sorry to hear of the loss. Sounds like he had an awesome gift. Karen

I am so sorry for your family's loss. His music and spirit will sing on forever in your hearts.

That is sad. My condolences.

What a magnificent tribute you wrote here, Connie, for Bob. He sounds like a wonderful man. My sincere condolences to all. May Bob's soul rest in peace. ~Andrea xoxo

My condolences to Andy and his family. May they find comfort in their memories of Bob.

A beautiful tribute. My sincere sympathies for your loss.

A beautiful tribute to Bob and his selfless service to others. Condolences to Andy, Jen, Adam, and Noah, and their extended family

I'm so sorry. My father was buried at our small country cemetery with military honors. He was a member of our local American Legion Color Guard and took his duties very seriously. He marched in every parade and, after retirement, participated at every funeral. The group took their duty to honor other soldiers very seriously. They also enjoyed the fellowship of the funeral luncheons if invited, or going out to lunch without the ladies. I always respected what he did, but I don't think I fully appreciated all the did until his own funeral. The sound of the bugle echoing across the cold, empty winter fields that surround our church and cemetery was a sound that I will never forget. The military salute was the most solemn moment of my life. What your son-in-law's father did for others was a special service to others.

May his soul rest in eternal peace, surrounded by the angels' trumpets.

Condolences to Andy, Jen and family.

Thank you for this lovely tribute to a lovely person.

I hope someone will play taps for him. Sigh.

Nicely said about your loss.

My prayers for Andy and the whole family in the loss of dear Bob. What a beautiful tribute you have put on your blog today for Bob. May Bob find many opportunities to display his musical talent up Yonder!

I am so sorry for the loss of Bob. All the lives that he touched are sad today. My sympathies to all of them. The trumpeter touched so many lives through the years.

I remember you mentioning Bob before. You have written a beautiful tribute for him. I send my sympathies to Andy and the rest of the family. Will anyone play Taps at his service? I am sure there was a host of Angels playing the most beautiful music for Bob when he arrived!

I'm so sorry...I'd been praying for "Andy's Dad" ever since you mentioned it in a blog post. It's nice to hear the back story of a very special human being.

So sorry for this sad loss. Hope Far Guy’s Sister is not suffering.

Oh1 Gosh! That was just beautiful. My heart goes out to the whole family

A beautiful tribute. So sorry for your family's loss.

This is the post I couldn't comment on at the time and wanted to so badly. Your words are a wonderful tribute to Bob, written so eloquently. I can imagine the angels singing for Bob, and God saying, "Well done, O Good and Faithful Servant." What a blessing he surely was to so many families. Sympathies and prayers for the family.

Sorry for the loss.