Wistful Wednesday : A spot along the road

I must have been a fairly observant child.  I remember when there were buildings on this corner.  I also remember when it was a gravel road. 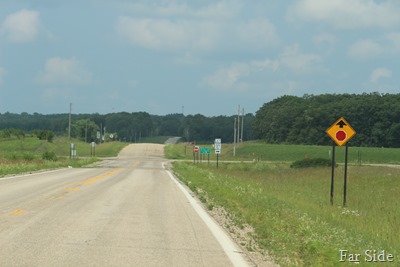 This was a busy spot in the road back in the 1920’s - 1930’s.  Believe it or not this was the only way to get from Park Rapids to Detroit Lakes. It was still called Highway 34.
Here is a Road Map from 1924-1925.  In 1924-25 Detroit Lakes was known as Detroit.  From early history of Detroit Lakes:  As a result of continuous postal mix-ups between Detroit, Minnesota and the better-known Detroit, Michigan, a special election was held on September 7, 1926 to change the city's name to Detroit Lakes. This befitting title has remained ever since. 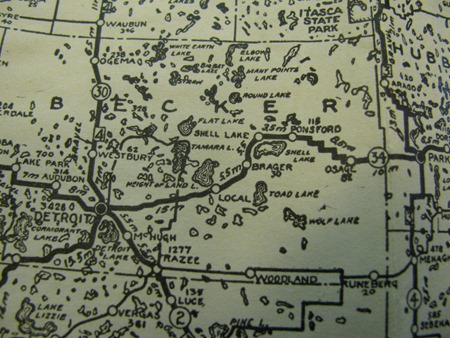 As you can imagine every little berg along the way got some business. 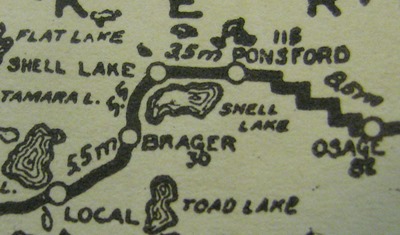 Today we are concerned with that third from the left circle…the one that was named Shell Lake…I didn’t know it was called that.  We used to call it Four Corners…not to be confused with the Four Corners between Height of Land and Detroit Lakes.

On the North side of the corners were Halvorsons and Lantondrys/Lotonche
Tufield George Latondre (Letonde).  Letondre's was a Dance Hall and Beer Joint that also sold gasoline.  Halvorsons had groceries, sandwiches, beer and pop and gasoline. On the South East corner was Grant Old’s he had tobacco, pop and gasoline.

In the 1940’s the new Highway 34 would be built straight from Osage to Detroit Lakes.  The corners would see less and less people going through. 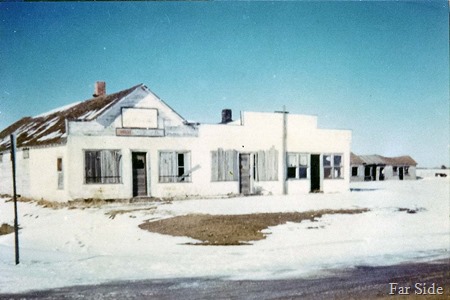 This is the Halvorson’s place of business.  I have known Irene (Halvorson) Mack practically forever, she let me scan this photo of the old store a few years ago.
In the first photo you will notice that there is a clump of Lilac bushes.
Irene  had many brothers and sisters.  For the past few years the flowers have been accumulating on the North East side of the corner.  This spring a signpost would go up. 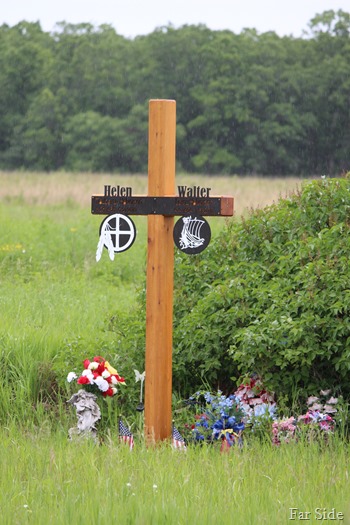 I am not certain who else is buried there…or if anyone is.  Helen was a Native American and she married Walter who must have been a Norwegian.  Walter was Irene’s little brother.  Helen and Walter used to plant a garden and many flowers they used to stop by the greenhouse on their way back from town.

I have heard a few wild stories about the goings on at the corners on weekends…especially during prohibition.  I have heard of a dancehall gal called Trixie and of someone driving in a snowstorm…all the while he was in the ditch and his wheels were spinning…someone opened the car door and asked him if he needed help getting out of the ditch.  He said “That scared the crap out of me.”  I am certain there are many more stories…but most of those storytellers have passed on.

One wonders what goes through a family's mind when their business of many years gets bypassed and slowly fails - falls to ruin - and then is wiped away as if it was never there.

Is this story about Helen and Walter? http://www.inforum.com/content/walter-helen-halvorson - nice photo of the couple if it is...

It is sad to see the changes in your hometown as the years go by.

Yes that is Walter and Helen:)

I enjoyed this and the article/photo Intense Guy shared. Hope you guys are feeling pretty good this afternoon.

I didn't know that about Detroit Lakes. Makes me wonder if Cleveland, MN near the St. Peter area had postal difficulties with Cleveland, Ohio. Not enough to change their name, at least. Interesting post.

I don't like to see empty buildings and homes and stores..it just makes me think of hard times and wonder what happened. I come across these little "spots" in the road when I drive the back roads. Especially the old country stores. I enjoyed your story today- thanks for sharing. Have a great day!

I didn't know Detroit Lakes was once just Detroit. My parents used to tell stories of the dance halls that were around after WWII and it seems quite a few involved snowstorms and landing in ditches on the way home. It's fun to imagine that corner busy as it once was with cars coming and going north.

The new highways go directly from A to B and skip all the little towns. The little bergs soon close up. the same thing has happened here. Yes, there was lots of fun in the small places.

I enjoyed this post! There are always a lot of changes that take place over the years in every town. Some are good and some not so good. It's always sad to see empty buildings and businesses closed. My little town used to be a lot more bustling than it is now. I remember when we had 2 jewelry shops, 2 drug stores, 4 grocery stores, 2 clothing stores plus a dry goods store that had a few clothing items and much more. Now we are down to 1 drug store and 1 grocery. No clothing stores and no jewelry stores. We do have a Dollar General and eateries and banks. Not too much else.

I love the old stories. My first TV experience was when my dad would take my sisters and me to the old general store at one of our crossroads, where a TV was set up high in the dry goods section, with a couch for viewing. Dad would watch the Friday Night Fights and we got to drink pop! The store building is still there and I think it is still a bit of a store. No more dry goods or cheese wheel or gas pumps though..

The other neighbor you mention appears to be:

I looked for the clump of lilac bushes but couldn't find them. I was certainly not an observant child and seem to have kept it up ever since. :-)

I went and looked at the picture from Iggy, too. So interesting to hear all the information about them and see their place. And Iggy added a lot of info, too! :)

In my notes I have a Tubfield..so that solves that question. Thanks for the info! :)